OK, so its not a princess, but the arrival of chicks in the blue tit nest is of more interest in this house than a royal baby + a general election.


They must have started hatching over night, and by 6am Thursday morning there were at least 4 chicks in among the remaining eggs.


So let's hope that both parents and chicks can survive for the next few weeks and successfully fledge!

The tiny chicks just look like pink, naked dinosaurs. Not a good look. 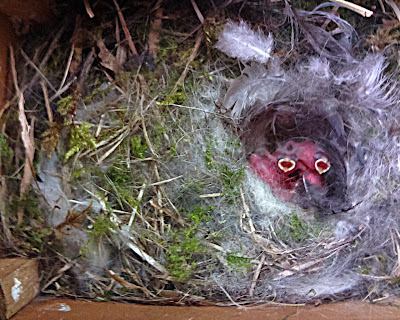 The broken egg shells are quickly dealt with by mum, who generally chooses to eat them. But when she gets bored of the taste (or maybe indigestion!) she will carry them well away from the nest, dropping them on the other side of the garden.

Both parents are hunting small prey, and bringing back little black objects which could be small flies or beetles.


We've noticed that the leaves on our hazel trees still haven't fully opened. In previous years these have provided a huge number of those small green caterpillars that blue tit chick seem to rely on for rapid growth.

The number of visits (counter divided by 2) has predictably increased, but the numbers are still not huge, and there has been a lot of fluctuation in todays counts.