During the week, all 8 of our blue tit chicks left the security of the nest box.

We have been away for a few days, so missed all the excitement, but have been able to catch up with the story, thanks to the video and data saved on the Raspberry Pi camera system.


We have not seen much of the blue tit family since we got back, but I did see about 6 of the chicks plus the two parents feeding in the apple tree this morning.

We have only been taking a close look at our nesting birds since 2009, but this season the blue tits seem to have been "running late" when compared to other years.


Nest building started about a week later than previous years. Once the nest was completed, the female appeared to take longer than I expected to lay her 9 eggs, and from hatch to exit took 21 days.

However, some of the important trees (like the hazel) didn't seem to open their leaves until later. And we didn't really see large numbers of green caterpillars (of the tortrix moth) being taken into the nest for the chicks. These caterpillars have been the main item on the menu in previous years.

From the bird box systems "motion" video clips, we were able to determine that chicks started to leave the nest at about 9:30am on Wednesday 27th May. With 7 of the 8 chicks gone by 10:15am, just one lonely and rather small chick remained.

At least one of the parents continued to feed this little chick until finally, just before 1pm, it took the plunge.

For those that delight in data


As my system logs data, I feel oblidged to chart it, and post it. So if, like Chris Packham, you love a good graph...

By taking the box counter values and dividing by 2, I hope to deduce the number of times the adults have gone in and out of the nest. However, this is not valid in the early days (especially before nest building starts) when the adults like to hang on the front of the box and just poke their heads in.

But once the chicks have hatched, the parents tend to go in and out to feed them, and not hang on the outside, which could attract the unwelcome attention of predators. 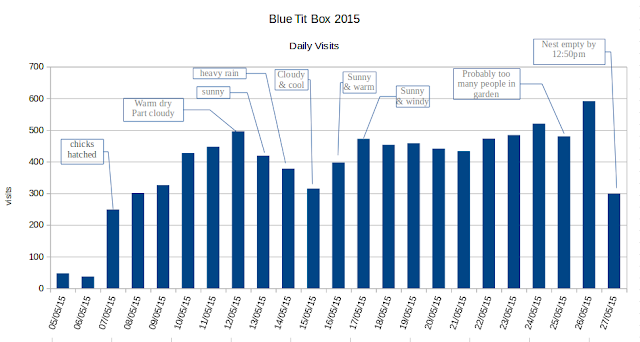 The annotation showing weather conditions was an attempt to discover why the feeding rate appeared to drop from the 13th to 16th. Whatever it was, it does not appear to be anything to do with the weather.

Most of the time our garden is fairly peaceful. But on the 25th we had a family B-B-Q, and for a one hour period in the afternoon, the visits dropped to just 8. If it hadn't have been for this disturbance, I'm sure they would have made over 500 visits on that day.

I thought I would also look at the peak hourly visits by day, and the average feeds per chick (i.e. visits divided by 8 chicks).

We can also calculate the average/chick over the feeding period. But I'm going to discount the first 2 days (the first was not a full day, and they hadn't really got into the swing by the second), and the last 2 days (because the chicks started looking out through the hole and triggering the box sensor).

So my calculated average daily feed per chick is 55.

This seems a long way short of "a hundred caterpillars per day" which I think I saw on the BTO website.

If I just use the figures from 17th to the 25th on the basis that the chicks will eat more as they grow, then I get an average of 60. Hmm, maybe our chicks are under-nourished!

One more graph, this shows the best hourly performance by day.

I've no idea what conclusions to draw from this. Many of the best hours occur early in the day (e.g. 5-6am or 6-7am) but this is not always the case.

If the parents bring more food during the first hour of the day (because the chicks are hungrier after an over-night break of 9 hours) does it show that the parents could do better for subsequent hours (as there is food available) or that the chicks are less demanding?

Or maybe the availability of food does go up and down during the day. But against this argument is that the parents use fat-ball as a food source, especially during the final hours of the day. 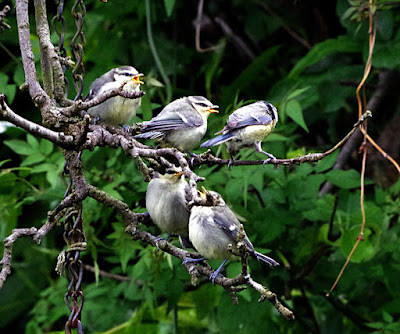 
In some ways I would have liked the new design (2015) box to have been occupied this season. However, it did get enough action early on to prove it was operating OK.

And it was quite good that the box originally designed during the winter of 2013 and used for the first time in 2014 has given us another trouble-free season.

There is one feature of the earlier box which is quite useful, and missing from the new design. The clear lid on the exposed electronics box makes it easy to see the Pi and wifi dongle lights, so I know at-a-glance if the system is powered up. I may add an external L.E.D. to the new box, although this would increase battery consumption.

Another difference is battery consumption. Being away for 4 days this week meant there was no possibility of swapping batteries over if/when one went flat.

The 2014 design uses a Raspberry Pi model A, while the 2015 design uses a model A+, which should draw less current. I did a simple comparison of the two systems:-

Although the differences appear small, just a few 10's of milliAmps make a significant difference to battery life. In this case, extending battery life by up to a third.

This year, both boxes were fitted with 50mm diameter windows to increase light levels. Although I didn't need to use the system lights as often as last season, there were still times when the lights proved useful (mostly early in the morning and late in the evening, but also as a in-fill light to illuminate the dark areas & front of the box).


We have also had robins nesting in a small plastic crate, inside our garden shed. I opened the shed door last weekend to find the chicks had left the nest, but were not quite ready for the great outdoors.

However, the sight of me in the doorway was enough to panic two of them to fly past me, into the garden. The other two tried to hide behind some flower pots on a high shelf, while I backed out, taking the shears with me.

It was clear from the mess everywhere that these 4 chicks had been using our 6' x 4' shed as a giant bird box. The other two chicks also departed a few hours later when I returned to collect the wheel-barrow.


I didn't expect to see them again that day, but when we went back inside the house in the evening, my wife found one of the chicks in our bedroom.

This is at the front of the house, so I don't know how the chick got there, but suspect it came in through the back door into the conservatory, through the kitchen, through the lounge, turned left up the stairs and then turned right.

I carried it carefully down the garden and opened my hands to set it free. By this time it was quite relaxed, and just sat on my hand looking at me for a minute or two.

When it did fly, it flew just a couple of meters up and into the hedge to be greated straight away by a parent who had obviously been watching us from above.