I just splashed out £225 on this USB microphone.


Initially I just plan to experiment & compare it with my home-made analogue bat recorder.


If all goes well this may turn into yet another bat detector/logger project.

Up til now it has been difficult for me to assess the performance of my current bat detector/logging system, as I've had nothing to compare it to. Sure, it records the echolocation and social calls of some passing bats, but I can't easily determine things like frequency response, range and quality of recordings.

Arnold Andreasson (the guy behind Clouded Bats) recently reviewed one of my pipistrelle recordings and pointed out that it contained both noise and distortion, but was generous enough to say that it wasn't too bad for a home-made system.

So I may be able to use my Ultramic as a 'gold-standard' to help track down problems with my existing system. Or I may just scrap it, and build a new system around this USB mic.


First impression is that this is a nicely designed & built device. I bought the version with a 192kHz sample rate, as this matches the rate of my current system, which uses a Wolfson analogue to digital audio card.

This microphone is easy to dismantle by simply unscrewing the threaded plastic ring at the USB socket end of the tube. 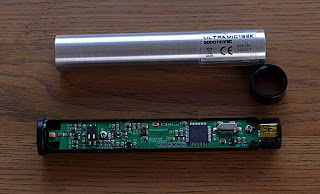 Looks like a nice, tidy, flow soldering job (a pleasant change from much of the consumer electronics that I've seen in recent years).

This mic is not limited to ultrasonic frequencies, so it could have other uses. You can adjust the analogue gain via two internal switches. 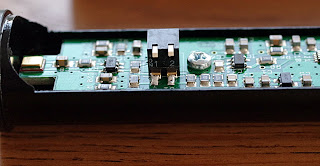 The user manual is not great, but my understanding is that there are 3 gain settings:-

All my tests so far have been with gain set to "high".

The Ultramic comes with a weather proofing cover which you can install inside the tube, over the microphone itself. I understand that this will have a detrimental affect on performance, so I don't plan to use it. However, I may try to devise a test at some stage to assess its impact.

USB connection is via a mini-B socket, and you need to provide your own lead.

I initially connected the mic to my Linux laptop and ran: lsusb

I then used Audacity to play around with the mic. I put the mic in the middle of a stack of 4 pillows in a relatively quiet room and captured a 10 second recording on 3 Linux computers.

Although the spectrum plots are not 'finger prints' they are relatively consistent when re-recorded several times. Also, for the 1st & 2nd plot above, I didn't move either the Raspberry Pi of the Entroware laptop. So if the mic was picking up any audio interference from the other computer, it should have appeared on both plots.

Not sure what to make of these plots. Do they give any clues to either frequency response or noise?

My conclusion is that the Ultramic is susceptible to electrical noise via USB. It may not matter too much, although it will have an impact on spectrograms as the background will not be a nice, uniform colour.


I had to do a few rapid and untidy mods to my bat logger software. The first was to specity the device assignment, which I found from Audacity menu Edit > Preferences > Devices. So in my Gambas code I specify: hw:1,0

On my analogue detector, I count pulse transitions to determine whether the recording may contain a high frequency bat call. For the Ultramic I needed to use 'SoX volume' data by using the argument: stat -v
And as we have plenty of traffic noise at this location, I also needed to use a SoX high-pass filter option: sinc 15k

I set up my existing detector and the Ultramic + Pi from my usual spot (the 2nd floor window of my house) but last night was very cold, and our local bats didn't come this way during the first few hours after dark. So in desperation I stood in the back garden holding an ultrasonic cat scarer, about 12-15m from both microphones.


My existing (analogue) detector is more sensitive, or at least its overloading due to the high gain setting. Maybe I should turn it down a bit!


...virtually none at this stage.

I probably need to reduce the analogue gain on my existing system to more closely match the Ultramic. If I do this by reducing the detector sensitivity (rather than reducing the Wolfson's analogue gain) it may give improvements in distortion and stability. For example, large voltage swings at the output of my battery powered detector, may modulate its supply or positively feedback to the earlier amplifier stages.

And I also need to reduce the detection threshold for the Ultramic as the system is currently creating too many blank recordings
Posted by SteveDee at 13:33