DHT22 Temperature/RH Sensor on the RaspberryPi

The DHT22 is a low cost, single wire sensor which measures temperature and relative humidity.


I started out just playing around with this thing, just wiring it to a Pi to see it working.


But I got sucked in much deeper into thinking about how it worked and assessing its limitations.


The DHT22 produces a serial stream of data. In other words the sensor has just one "wire" over which it sends data and receives commands.

It does this by simply raising and lowering the voltage level, and varying the amount of time that the wire is either "high" or "low". In my circuit "high" is approximately 3.3 Volts, while low is approximately 0 Volts.

The data output consists of a series of low-to-high-to-low sequences where each sequence represents either a logical 0 or a 1.

There should be 40 of these zeros and ones in a complete data set, and this data stream may start out looking something like this:-

The first 2 bytes contain the rh (relative humidity) value. In this example:-

Likewise, the third and forth bytes represent 10 x the temperature reading.


In order to validate the integrity of the sensors transmitted data, the unit generates a simple checksum, which occupies that last byte of the 40 bit data stream.

This sensor calculates the checksum by adding the 4 data bytes together, and using only the lower 8 bits of the result as the 1 byte checksum.

So the high byte is disgarded, and the checksum becomes 43hex.

When our system [software] reads this data it simply repeats the process and checks the result against the checksum. If there was a data transmission or reception error, our calculated checksum will not match the checksum transmitted from the sensor, so we can ignore this bad data.

There are of course a couple of exceptions. If the data error is in the 1st or 3rd bytes, this error will not be detected by the checksum, because we only use the lower 8 bits of the result. Also, it is possible that 2 or more errors may cancel one another out (e.g. a -1 error in rh and a -1 error in received checksum).

In the second case? Well, someone with good maths abilities could probably tell me the likelyhood of canceling errors.

I simply plugged it into a breadboard and wired as follows:-

Initially I fitted a 10k Ohm resistor to pins 1 & 2. During testing I replaced this with a 4.7k and also added a 0.1uF capacitor across the supply pins (1 & 4) although these changes did not appear to make any significant improvement in performance.


Once again I'm relying on Gordon's wiringPi software, and here are a few points regarding the notes that follow.

Once wiringPi is downloaded (use the latest snapshot) it should be unzipped and located on the RaspberryPi in a suitable folder (e.g. /home/pi/wiringPi-version).


So lets start by building wiringPi:-
Run ./build from your wiringPi-version folder. The terminal should show something like this:-

Now run the demo program by typing: sudo ./rht03 from the examples folder.

You may start to see rh and temperature readings displayed in your terminal. However, you may also notice your Pi soon becomes paralyzed as the cpu load sits at 100%.

I opened rht03.c again at added a 5 second sleep:

After saving, making and running rht03 again, I found the cpu load to be reasonably low, and the screen spat out readings from time to time. Sometimes the readings appeared 5 seconds apart, and sometimes there were much longer gaps.

I had another look at rht03.c and noticed that it doesn't output results unless they have changed since last time, hence the apparently erratic display rate.

This demo program calls readRHT03 which is in ../devLib/maxdetect.c. This file contains most of the routines used to talk to the DHT22 sensor.

Very basically: readRHT03 calls maxDetectRead which "wakes up" the sensor by holding the data line low for 10ms and then pulsing it high for 40us. It then calls maxDetectLowHighWait and waits for the data line to switch from a high to a low state (this is the signal from the sensor indicating that data transmission is about to follow).

The maxDetectRead routine then calls maxDetectClockByte which checks if the data line is a 1 or a 0 (after a 30us delay) and uses this to build up the data, bit-by-bit.

I decided to sprinkle this code with printf so I could see more closely what was going on.

// Don't read more than once a second 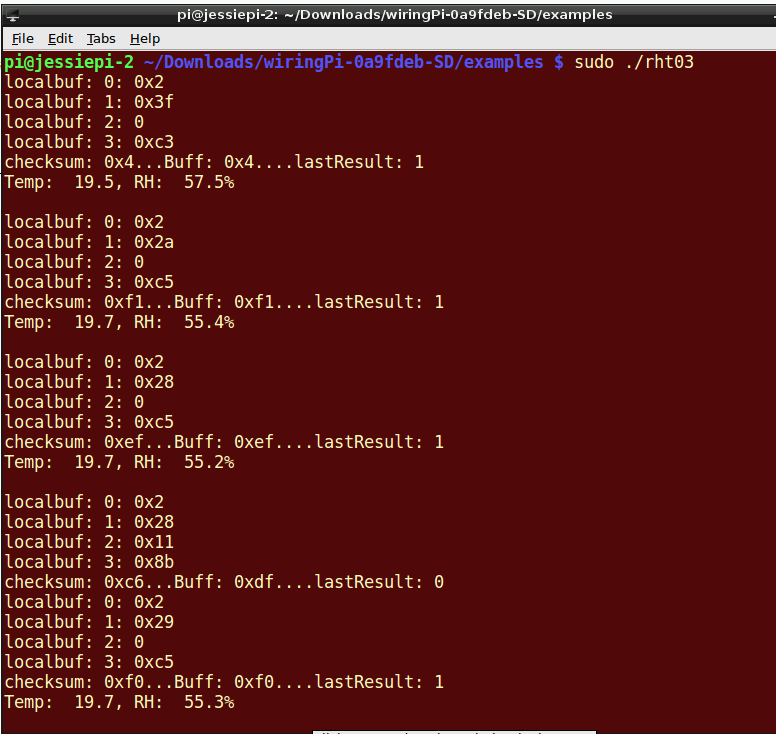 You can see a checksum error for the data block with lastResult: 0

I'm probably seeing approx 15% of results with checksum errors. I don't know if this is typical for this sensor.


In order to use Gambas to write a test program, I hacked wiringPi (similar to the method I used here) to create a single library that supports this temperature sensor.

The wiringPi routine was then declared in Gambas like this:-

...and I used a Gambas routine a bit like this:-

Note that intTemp and intRH are 10x the actual value, so have to be divided by 10 for display.

This test program took readings from the DHT22 at 10 second intervals and also recorded the total number of readings and the number of errors. I did not record checksum errors, I only recorded readings which were either more than 5'C or 5% different from the previous reading. So this error count may include data error in the high order data byte which do not affect the calculated checksum.

In approximately 3500 readings I recorded 5 errors.


Since the DHT22 is designed to measure temperature and relative humidity in an environment like a house, it is not too much of a problem to drop readings when a checksum error is detected, or when a reading is clearly very different from previous and subsequent readings.

So with that in mind I should be able to find a use for this thing.