I'm running way behind this year, but I've now started building a RaspberryPi powered nest box for the 2015 season.


The 2014 system will be re-assembled, bolted to the side of a tit box and used again without any real changes.


But the 2015 controller version will be much smaller, and hopefully will fit inside a bird box without the need for its own enclosure.

I've yet to decide whether to build this years version into a tit box (i.e. a bird box with a 25-30mm entrance hole) or fit it inside an open fronted robin/wren box.

This new design is smaller than last seasons because I'm using the new model A+ RaspberryPi.


By building the controller on a small piece of vero-board and fitting it as a daughter-board to the Pi, I've managed to keep the dimensions down to 75mm x 60mm x 40mm.

This includes the wifi dongle which unfortunately sticks out, adding 10mm to the length. I could replace the USB socket for a vertical jobbie (like last year) but I'd then have to cut a slot on the controller board.

By the way, the USB socket on the A+ is still way too tight for my liking. I suggest you slacken the tension clips before trying to force your Edimax into place.


The controller board connects to the Pi via a 26 way long pinned header.

In order to solder the header to the vero-board, I had to allow enough of a gap for the tip of my soldering iron. 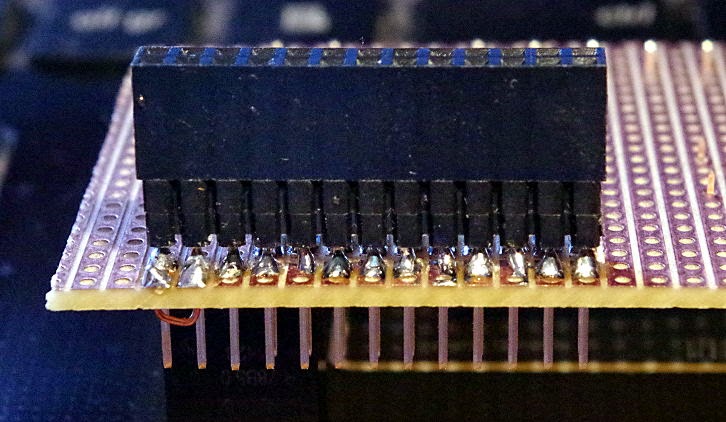 However, the header is a good, solid fit to the board, even with 3 of its pins missing.


If I decide to fit this design into an open-fronted robin box, the photo beam trigger circuit isn't going to work. So I plan to try using a PIR sensor mounted inside the box, alongside the camera.

Also, I won't be able to use bright white l.e.d. lighting because the box is open-fronted, and the chicks will be sitting ducks (er...well, you know what I mean). Therefore I need to use infrared l.e.d. lighting and the PiNOIR camera.

I'm making a few smallish changes to last years design, such as:

The other small problems associated with installing an open-fronted box include location and timing. I need a good, well covered location, and I need to get the box out there during January, because that is when the robins start to look around.