Having installed a fresh image of Lubuntu 15.10, I found I had a problem adding newly installed applications to the Launch Bar.


A quick search of the internet did not reveal anything useful, so I had to open a few files and work out what was happening.


Strange that I hadn't noticed this problem before!

Lubuntu is a light-weight Linux distribution closely related to Ubuntu and Debian. It uses the LXDE desktop environment, which provides a very simple desktop with a customisable panel.

The panel has an application launch area to the right of the "menu" icon, where you can add short-cuts to your most frequently used applicatiions.

All you have to do is right-click the panel, select "Add/remove panel items", select "Application Launch Bar", and then select "Preferences". 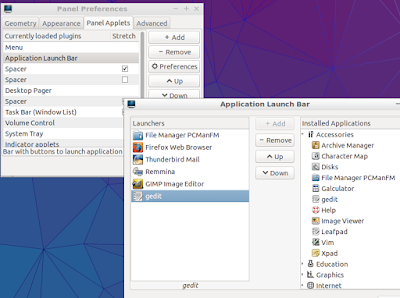 You can then select applications from the list on the right and add them to the launcher bar.

The rogue applications included gEdit and Thunderbird, while other newly installed applications like The GIMP were listed and easy to add to the panel.

I opened /usr/share/applications as root (via terminal: gksu pcmanfm) and checked that the desktop files for these applications were in place. Opening a couple of them in a text editor, I noticed the rogue applications contained a line like this:-

...so I removed these lines in gedit.desktop and that instantly fixed the problem for gEdit.

In the thunderbird.desktop file I found two lines like this:-


According to the FreeDesktop standard, the "OnlyShowIn" option should specify a "legal" option in an application's .desktop file, otherwise the desktop environment should not include the application in the desktop menu.

This probably implies that either the Lubuntu repository should contain a version of (say) Thunderbird with a LXDE specific thunderbird.desktop file, or applications should configure themselves during installation to suit the desktop environment in use.