I used the combination of Picaxe and Raspberry Pi for the first time a year ago.


At that time I programmed the Picaxe by temporarily soldering a connector to the board and connecting it to my laptop.


But I've now made a few simple modifications to my BirdBox2016 controller so I can program the Picaxe from the Raspberry Pi.

The programming interface between Pic & Pi is described in an earlier post.

Since the 08M2 Picaxe in my birdbox application controls the power to the Pi, I need a simple way to override this during programming. I also need to be able to perform a hard-reset on the Picaxe.

These two issues can be addressed quite simply by adding 2 jumper links to the controller board.


As the 5Volt regulator is controlled via an open-collector Darlington, I can turn on the Pi power by simply grounding the MOSFET gate (Link 2). 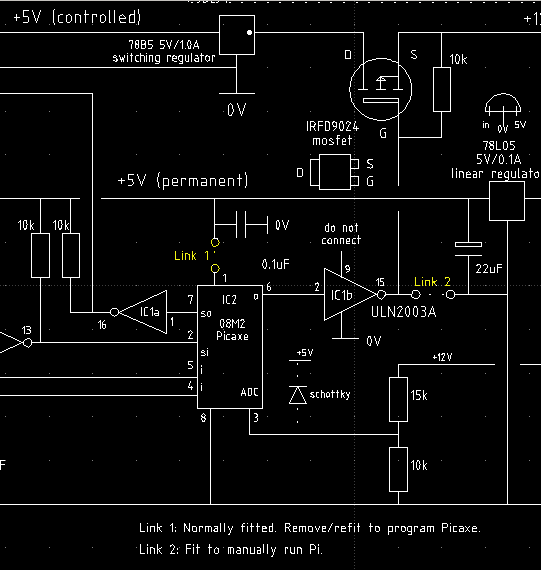 And I can perform a hard-reset on the Picaxe by disconnecting, then reconnecting the Picaxe power link (Link 1).

Under normal running conditions, Link 1 is fitted, while Link 2 is simply removed and then "parked" on one of the two link pins.

It is now possible to re-program the Picaxe while the controller is still connected to the birdbox Pi A+ (...as long as I can access the links). However, as the controller module is easily removed, I would normally choose to fit it to a much faster Pi2 and use screen/keyboard/mouse, rather than the slower option of A+ Pi via VNC.