BirdBoxPiCam2014: Eggs in the nest

On Monday the female left the nest, and rather carelessly, she didn't bother to cover the eggs.


Since then the female has started the incubation stage, and we have been able to get a better look at the clutch.

It was quite late in the afternoon when I checked the motion feed and caught a glimpse of what I thought was just 2 eggs. But when I turned on the box lights to "Dim" mode I was able to capture this image using RaspiStill. Two days later (Wednesday) the female appeared to be spending most of the time in the nest, so I thought the laying phase had come to an end.

But today I see there are nine eggs! This picture was taken with "Dim" light mode. 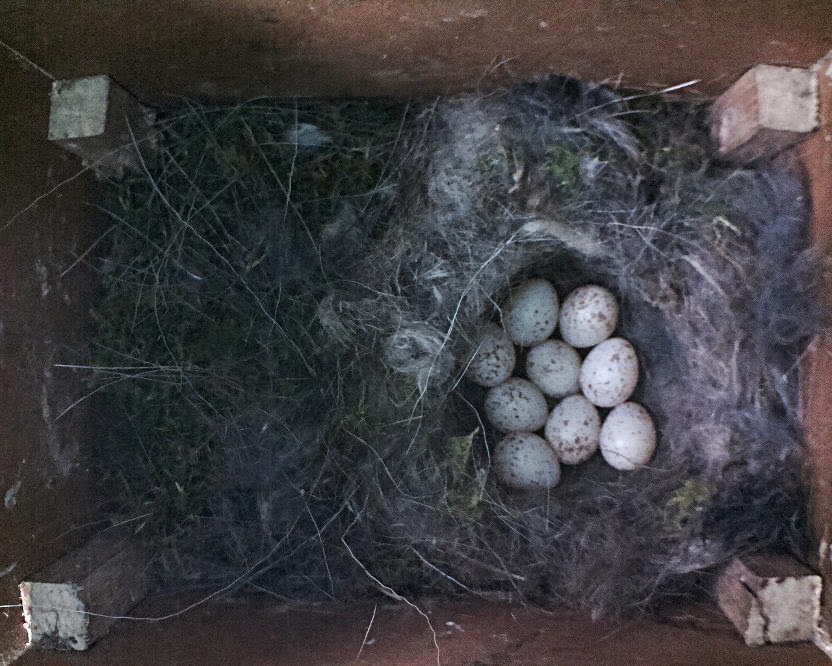 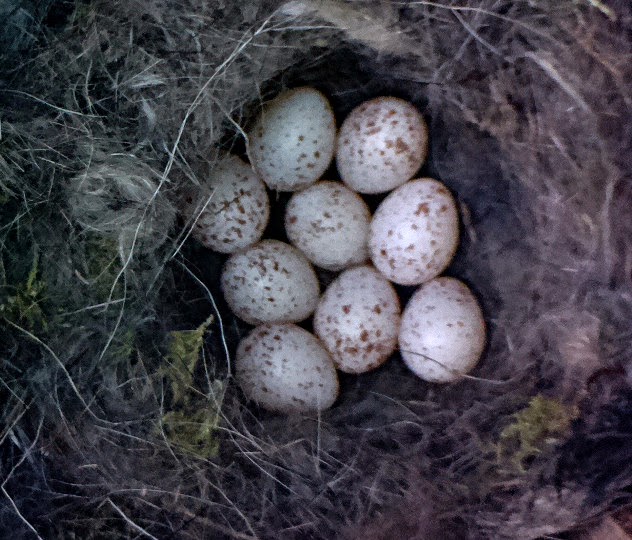 As mentioned in previous posts, I believe the out-of-focus region on the right on the image is probably due to poor centering of lens above the sensor.


The Gimp was used to make slight changes using "Levels" and the "Unsharp Mask" filter.

In previous years we have generally noticed that incubation only starts when all eggs have been laid. But in this case, its not clear whether there was an overlap (i.e. did the female start incubation on Wednesday, and were there 8 or 9 eggs at this stage?).

Going back to my plan, I've started to add the actual timescale as best I can.

So the female now has to spend almost 2 weeks just sitting on her eggs. How boring must that be for a very active creature, with a short life-span of just 2 or 3 years?


I managed to screw-up my sd card yesterday while trying to edit my control software.

Its always a delicate task. Since my control program supplies the pulses which keep the RaspberryPi fed with power, I have to be careful when I'm running the Gambas IDE to create a new executable.

For the second time since installing this system, I lost connection after closing my control program. The combined affect of leaving the Gambas IDE open and having a broken VNC connection, resulted in a trashed sd card image.

So this morning, after waited for both the great tits to leave the nest, I quickly removed the control box lid and replaced the sd card. This did not involve tapering with the bird box itself, but I did not want to stress the birds in any way by getting too close to them.

I'm going to create a second simple program just to kick the controller and keep the power on while I carry out any future updates to the control program. This will hopefully avoid any further mishaps.
Posted by SteveDee at 22:42