Now that I've had a chance to run this system on a lead-acid battery for a while, I can see that the LED lights are much brighter than they were when powered from AA Ni-Cads.


So I've done some mods and captured a few more test images.


Here are some notes and pictures.


Turning Down The Lights


I'd originally allowed for 2 banks of leds, 3 in each bank. But I've decided that 3 x 10mm leds provide plenty of light. The two control lines are now being used to provide a "dim" and "bright" option giving more flexibility.

In the Dim mode, the leds current is limited by a total of 1240 ohms, while in Bright mode the 1k resistor is bypassed, so the current rises from around 5mA to approximately 20mA.


As previously mentioned, the Pi camera software (driver) provides a reduced field of view when operating in video mode. So my software interface allows me to use video or stills mode. 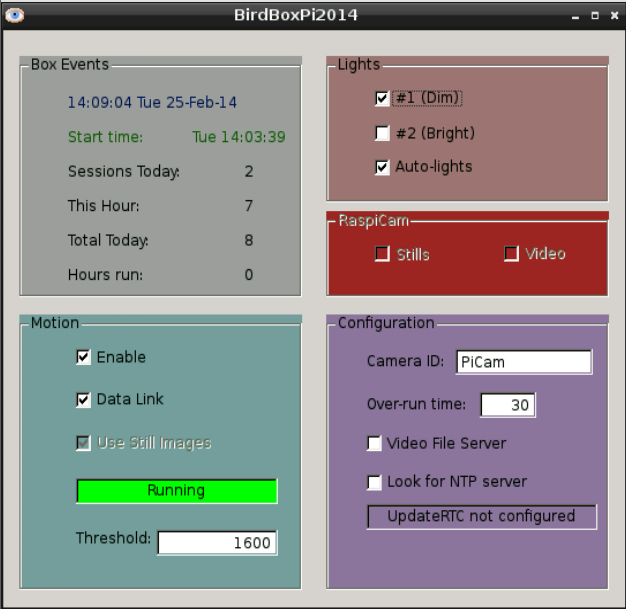 These options enable motion to stream and capture video using the wider view (but slower) Stills mode, or the faster, but lower angle of view video mode.

These details may change after the system has been deployed, as the Raspberry Pi is also loaded with the Gambas IDE.


I was pleasantly surprised by the apparent depth of focus, something that has been a problem with some of my existing analogue cameras.

These images are reasonably well focussed over the range 85 - 220mm. What is a little odd is the right side of the picture, which seems to be focussed closer than the centre. It is probably due to poor alignment of the lens assembly to the camera (i.e. its off centre).
Posted by SteveDee at 14:50