Having assembled the system to a point where it can be tested with a lead-acid battery, I now feel confident that I am well on the way to a viable bird box.


There is still quite a bit of work left to do, but I don't expect to trip over any last minute show-stoppers.


However, there is an issue with image size which is yet to be resolved.

The physical design of this project is dominated by the the Pi camera, or more specifically, the camera cable. 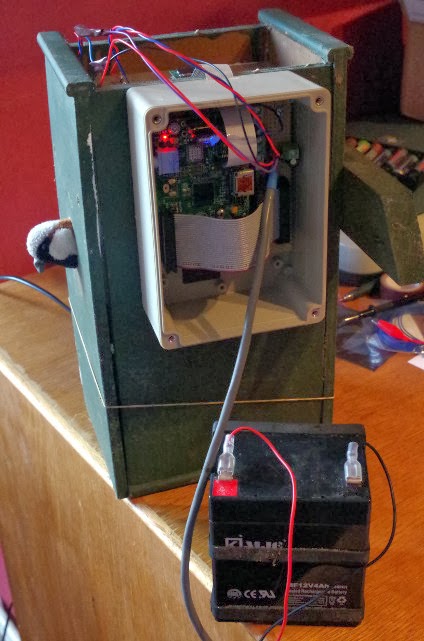 In order to keep the camera cable straight and flat, the RaspberryPi needs to be positioned on the side of the bird box, so that the cable can run up the side and curve gently to the camera module.

I built the controller circuit on a piece of standard strip board. 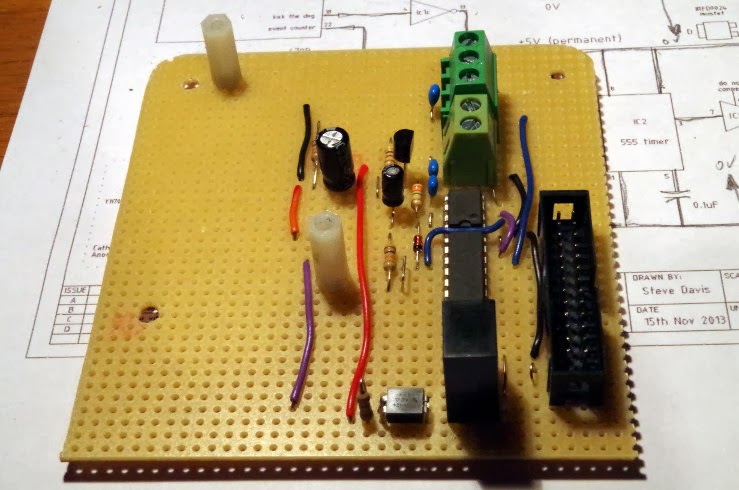 The high components had to be positioned outside the foot-print of the model A RaspberryPi. I chose to use circuit board terminal blocks for connection to battery, box entrance sensor and LED lights.

My model A had a damaged USB connector, so I took a gamble and replaced it with a vertical connector to save some space. I also removed the yellow video socket. 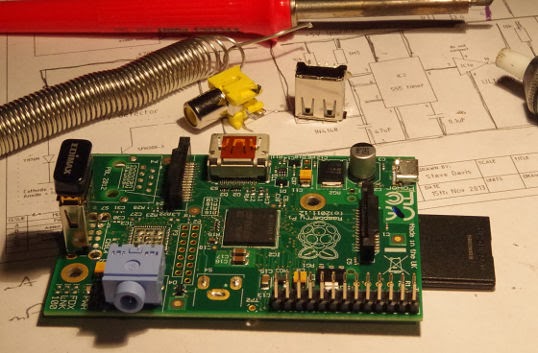 The RaspberryPi sits on plastic spacers mounted to my controller, which in turn is attached via 3 of the enclosure mounting points. 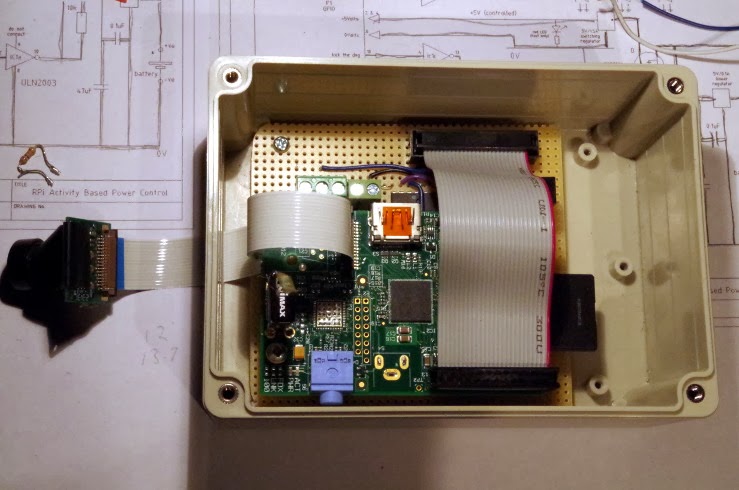 Although my ABS enclosure had a good IP rating, I've had to cut a slot using a dremel to run the camera cable into the bird box. I'll probably add a plastic shield on top before fitting a wooden roof to cover both bird box and ABS enclosure.


I came across some large 10mm super bright LEDs from Spiratronics which I just had to buy and try out. They are mounted on the inner roof (ceiling) of the bird box using copper coated panel pins. 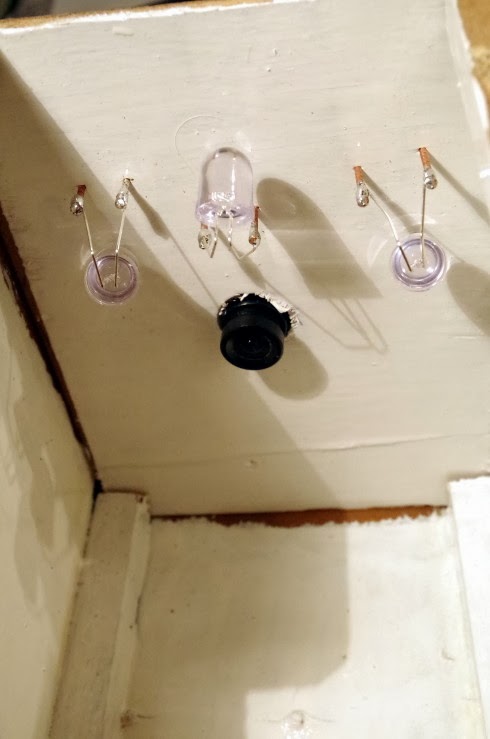 These LEDs point upwards to avoid blinding the occupants, but at a slight angle from vertical, in an attempt to spread the light around. I can't see any signs of lens flare, but may fit a simple tube to the lens to act as a basic hood.

I used a few copper coated panel pins so I could solder the LEDs to them on the inside, and solder connecting wires and a 120 Ohm serial resistor to the top side. 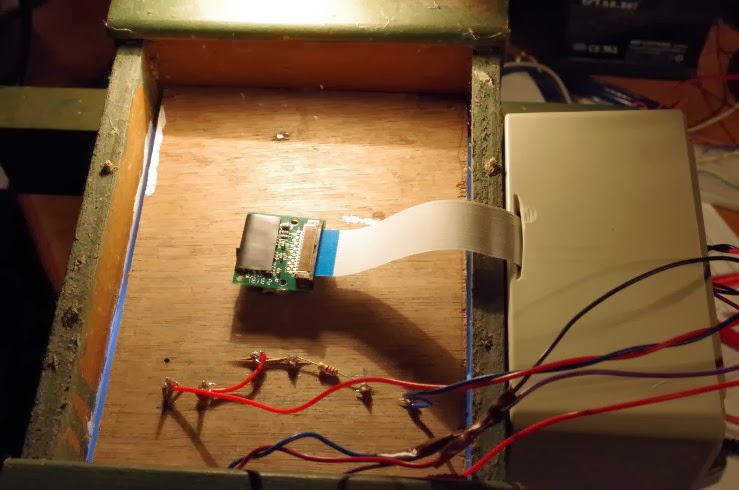 
With the box now assembled, I was able to use a proper lead-acid battery for the first time (I had been testing with 8 x AA recharge-ables, which give a lower terminal voltage than lead-acid).

Using VNC on my Lubuntu laptop, I was able to remote-in via wifi, run my Gambas test program and view images from the camera. 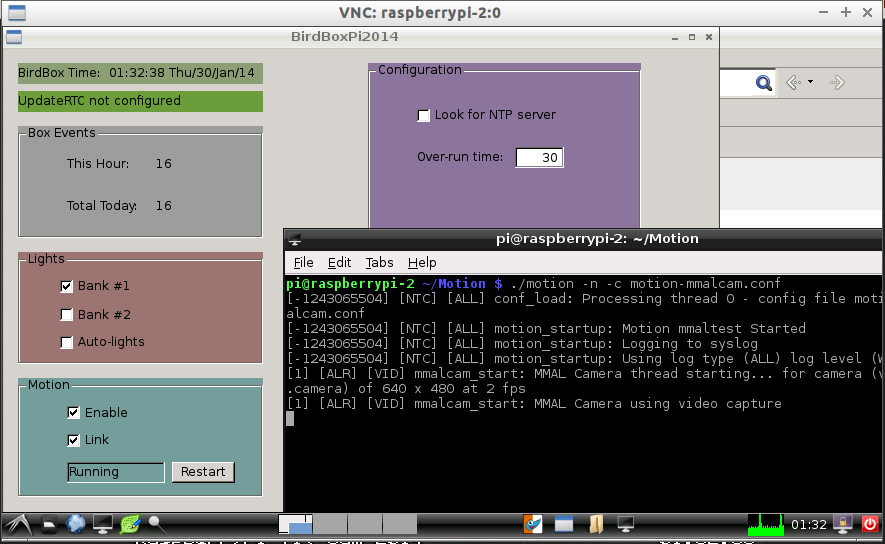 It was a pleasant surprise to find that the system drew less current than I had expected.

According to my meter, the system runs with a current drain of between 0.15 to 0.2 Amps. When in standby (i.e. the RaspberryPi is off) the current is only 20mA.

My test battery is only 4Ah, but I plan to use a 12Ah mobility battery when this system is deployed, which will hopefully last a few days between recharging.


One problem that remains is the apparent field of view from the Pi camera.
Its a known issue that the image returned by the camera in video mode is only 25% of the full image, as produced in "still" mode.

However, my new best-mate jamesh has this problem on his to-do list.


I did consider getting a wider-angled lens, but I don't think this would help that much as the one I'm using is probably a 2.8mm 120deg type. I say "probably" because these board lenses are not marked, and I've lost track of which is which. But I do know that the one I'm using has a slightly wider angle than the 100deg lens I bought before Christmas.

The illumination from the four 10mm LEDs looks adequate, so I'm not going to bother adding a second bank of LEDs, which was the original idea.

OK, I have a few more weeks to develop and test the software before I must screw the box to our arch-way, and deploy the ultra-sonic cat alarms!

See related posts:-
The Plan
The Activity Based Controller
More on the Controller
PiCamera Modifications