Feeding the Rats (...and hedgehogs) part 1

We are all encouraged to feed garden birds and look after our local hedgehogs.


But its difficult to do this without boosting the population of pests, such as rats.


So is there anything we can do to get the balance right?

I recently heard someone complaining that their neighbours were 'ground feeding' birds (...rather than using a bird table) and therefore they were encouraging mice and rats. Actually, mice and rats are smarter than that. We used to have a bird table and often witnessed these rodents climbing the pole to access the food.

Birds are messy eaters, so much of the food ends up on the ground anyway, especially if you use hanging feeders. But even if you built a large feeding platform, it would still be very difficult to stop other species (including rats, mice, squirrels & foxes) from helping themselves.

Within 3 metres of our back door, we have 2 small bird feeders which look like cups on thin poles about 400mm high.


These are filled with sunflower seeds, and are used almost exclusively by blue tits, coal tits, marsh tits & great tits. The 'fall-out' is generally picked up by an even wider range of garden birds, plus a few pidgins and a couple of voles...

But further away, we have a number of hanging bird feeders and our hedgehog feeder. Until recently the hog feeder was proving a good way to feed just hedgehogs. But recently, a rat overcame its natural caution and started to raid the feeder.

On the plus side, I now have a rat to experiment with!


The popular belief is that rats are neophobic. That is to say (...just like a few people I've worked with) they don't like 'change' in their environment. However, they don't have an irrational fear of all things new, they are just very cautious. Unlike mice which are very curious and will explore anything new, rats tend to stand back for a few days, until they get used to what ever new object has appear in their manor.

And naturally, rats do display individual characteristic, so some are less nervous and more curious that others. But for experiment #1 I decided to create a sudden change to the hog feeder.


I thought this should provide enough of a change to keep the rat well away, but I was wrong. The dangling plastic caps probably stopped the rat from actually going inside... 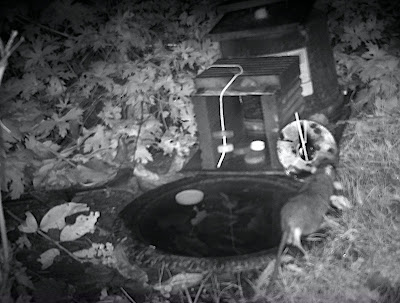 ...but it was brave enough to checkout its reflection in the DVD. I don't think I'm creative enough to keep coming up with original changes to the feeder, so eventually I expect the rat will return to entering the feeder and taking the hog's food.

However, the hedgehog was not bothered, and just pushed his way passed the hanging plastic caps, and for the first night in over 2 weeks, all the GoCat was his!


For experiment #2 my ultrasonic cat/pest/children deterrent was put to use. I wanted to see:-
The initial test was run for 4 nights, and there was no sign of any rats or mice on the camera images during that time. However, at least one cat and one hedgehog were not put off by the ultra sound, and again the hog ate all the GoCat.

When I turned the ultrasonic box off on day 5, the rats & mice returned that very night. This seems almost too good to be true! So I will need to repeat this test a few times to be sure its the ultrasonic sound that is keeping them away.


As my improvised rat bait structure was now getting a bit manky, I also invested in a proper bait station...

...which was then loaded with bait and a few GoCat biscuits... 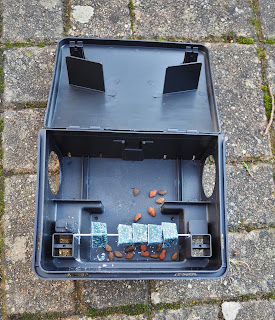 ...and deployed alongside the hog feeder...

The rats are going to need time to get used to it, which also means turning the ultrasonic box off for a few days.

I hope to post 'part 2' of this post in a week or two, when I have gathered more information.


We are encouraged to feed the birds in our gardens, and support the remaining population of hedgehogs by supplying food and water, and leaving untidy areas where hogs can shelter overnight and hibernate during winter months.

However, if you have a rat problem you are advised to remove any sources of food & water, and tidy up your garden so that they have nowhere to hide.


This modern model of living, based around high density housing with small gardens linked together via 5" holes in the fence line, is a nonsense.

For every household where the occupants want to attract garden birds or hedgehogs or foxes, there will be 9 or 10 that don't want to see rats & mice running around their back yard. And some will see the actions of their neighbours as anti-social.

Small gardens do not lend themselves to having 'wild areas', wood-piles, trees or ponds. Few have quiet areas away from people and pets.

Maybe the only answer is to make a better job of providing for the needs of our wildlife away from dense housing areas. Or maybe stop building houses with gardens no bigger than a 'welcome' mat.