If you are familiar with Gambas (or Basic) you shouldn't have too much trouble writing Gambas scripts.


Although scripting is often used for small programming tasks, it can be used to create more ambitious projects.


It may also be useful on headless/GUI-less systems, like the Raspberry Pi.

As Gambas scripts can be written using a simple text editor, you don't need the full Gambas IDE graphical interface to write these scripts. A Gambas script file is basically just a text file with 'execute' permission.


So let's start with a simple 'hello world' example. Type this code into a file:-

Save the file with a suitable name. It doesn't need a special file extension, so let's call it: gscript_ex1

Use the file manager to set file Permissions (via file Properties) to allow execution as a program.

Navigate to the directory containing gscript_ex1 and open a terminal. Type:-

Terminal should now look similar to this:- 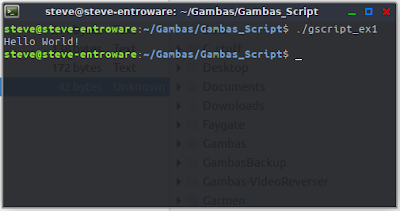 Like all scripts in Linux, the first line must be the "shebang" which points to the Gambas script interpreter.

This simple example could be expanded to use routines like this:-


You can pass arguments to a script as illustrated in this next example (gscript_ex3):-

When you run this script, include two integers as arguments, like this:-

The output from this script should be:-

ARG[0] is a special reserved argument. Try printing it, and see what you get!


We can also create a class and call its methods, by including the "INCLUDE"  directive.

The main program should run and use the Maths.add and Maths.multiply methods from the gMaths.class.


I believe that any Gambas components listed under Interpreter Enhancements are available in Gambas Script. But any that are not can be used in your scripts to extend functionality by including the USE directive.

In the next example I want to create 'sockets' so I use the gb.Net component:-


If you run this, you can check that its running by typing in a second terminal:-

By using the techniques and options illustrated above, it should be possible to build quite powerful applications, especially for headless systems such as servers and devices.