One thing I particularly enjoy about observing garden birds, is witnessing behaviour I've never seen before.

Even better, is when the experts say that a certain kind of bird always does this, but you see one doing the opposite.


When I was a kid, the natural world was expressed in very simple terms. The Lion was the king of the African jungle.

But thanks to hours of observation and filming, often under very difficult conditions, we now know that hyaenas and even buffalo sometimes get the better of lions. And that the largest African animal (the elephant) has to run away from one of the smallest creatures (the bee).

But returning to my English garden, there seem to be some questionable claims made by so-called experts regarding garden bird behaviour during the nesting season.

So, your pair of blue tits have built a nice nest, produced 10 eggs, and all have hatched.... 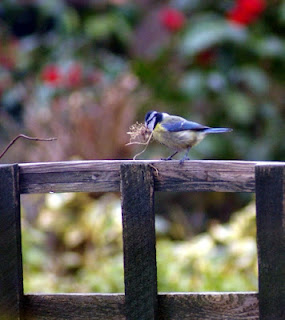 ...but then the chicks start to die, one by one, and none survive.

In some books and on a few websites, some will suggest that the parents were probably "inexperienced". I've even heard a BBC Springwatch presenter voice this opinion! Shame on you!

Just how do you think a blue tit could gain Parental Experience? Well, I suppose blue tit parents could gather around a bird table and discuss their experiences. Or maybe after 5 or 6 attempts, a nesting pair might work out that this method works better than that approach. But lets consider a couple of important points.

First of all, small garden birds an very dim. I don't mean a bit dim, I mean they are really, really, mind-numbingly dim. If you put a cuckoo egg into a dunnock's nest, the foster parents will raise it as their own. They will keep feeding it as it gets larger and larger, and looking less and less like a dunnock. Maybe on the last day, when the huge chick eats its foster parents, they might get a hint that something is not quite right! (...OK, I made that last bit up).

The second point is about life span. Without worrying about the difference between "life expectancy" and "Average life span", its often said that a blue tit typically lives about 2 years. So whatever measure is used to arrive at this figure, its clear that many birds only get one, possibly two chances to breed and raise off-spring. Even if these creatures where really smart thinking animals, making the connection between failure and the reasons for failure, would be quite an intellectual achievement.

I think nests fail for a number of reasons. I think there is a wide variation of bird behaviour within species. For example, we have observed a female blackbird facinated by her own reflection. She used to spend hours each day attacking the windows on our shed, our garage and a neighbours house. This is not "normal" blackbird behaviour. She may have been psycho, but individuals in each species exhibits a range of behaviour, be it choice of nest location, when to start breading, how many eggs to lay, or how many times to breed in a session.

Such a range is a necessary part of evolution, because if conditions change (e.g. if there is a trend for it to get hotter/colder/wetter each year) then maybe only birds that breed earlier/later/more frequently will survive. Their genes are then passed on, and the species adapts and survives.

So I think its a myth. Don't blame the parents!

Cleaning nest boxes: Shall I or Shan't I?

I dare say that birds sometimes fall victim to parasites and diseases. But I only ever clear out old nesting material to protect me, not the birds.


THE most successful box we have is in the far corner of our garden, close to a major road, but well away from any houses. By chance, this poorly constructed box made from bits of an old fence, has not rotted away in the 14 or 15 years since I put it up. I'd say that its been used at least 10 times over the years by blue tits, great tits and coal tits. Its almost certain that chicks have died and rotted away inside, but still new couples arrive most years and make good use of it.

Birds have been re-using natural nests for thousands, possibly millions of years without assistance from us. I noticed on one website (possibly BTO or RSPB) that they advise you should clean your nest boxes during October with boiling water, then put bedding material in for winter roosting and subsequent spring nesting.

How odd? Surely if birds shelter in your box during the winter they could leave a nasty mess for any newly weds arriving in the spring?

If you put up a new bird box with a camera, within a few days (if you look very closely into the monitor) you will see lots of tiny critters crawling across the floor. Add some nesting material, and you will see a wider variety of insects. Some find their own way in, and some are carried in on the bodies of visiting birds and mice. The droppings of these insects and animals creates a further explosion of residents.

But if you are not convinced, and wish to clear all your nest boxes each year, please wear a mask (to avoid lung conditions like Bird Fanciers Lung) and wash your hands properly afterwards (salmonella...yuk!).

If you have to do any repair work on the box or the camera, always clean the box properly (outside, in the open air) before carrying the box into a closed space, such as your workshop.

However, prevention of contamination caused by bird feeders is a more important issue for your garden birds.

Box location, proximity to feeding stations and others

I agree that it is generally a good idea to keep nest boxes away from feeding stations. We have had very little (but some) success in previous years with great tits in a nest box less than 5 metres from our bird feeders. But its generally not successful with tit boxes.

However, the bird that bucks the trend is the robin. Our robin box is less than 3 metres from our busy feeding station, and has been very successful. Robins may be territorial, but they only seem bothered by other robins. So keeping rivals away from their nest and the feeding station is just in a days work!

Likewise the proximity to other boxes may not be a problem for certain species. Sparrows seem to appreciate the company of other sparrows, but blue tits don't like other varieties of tit to be too close. A few years ago we had great tits move into a nest box about 4 metres from a blue tit box. The blue tits gave the great tits a hard time, but the great tits just got on with building their nest and eventually raising their chicks (...the blue tits were successful too!).

...and also: Box Orientation - which way should it point?

I can safely say that we have had success with boxes pointing to each of the 4 major points of the compass. The arguments given for preferring certain directions are: temperature and weather.

Let us consider the temperature first. For a nest box with a small entrance hole, it is possible that the sun may shine in through the hole at certain times. During the morning and for longer times in the spring, the sun is lower in the sky, and so some heating may occur. This may be beneficial during the spring when the temperature (both inside and outside the box) may be very low. During the warmer months (May & June) the sun is high in the sky around the middle of the day, so the sun shines down on the nest box, not in through the entrance hole. Therefore it does not matter which way the box points, the temperature will be much the same.

I monitored the temperature in 2 nest boxes during 2011. The first was in the shade for almost the whole day. The second was in the sunshine for most of each day. We had some hot days during the early summer, recording mid-20s (centigrade) in the shade with corresponding temperatures in the mid-30s for the unshaded box.

In a small urban garden, it can be quite difficult to find locations that meet all the (optimum) criteria. Added to that are the difficulties of running cables for cameras. So I'd suggest installed several boxes, some with cameras fitted and some without.

Where possible, put one or more boxes as far away as you can from people, and out of reach of cats. Then look for a convenient site for your camera birdbox which will probably need to be nearer your house. This should be a safe location, even if not ideal.

Orientation is often determined by location (i.e. for tit boxes the entrance hole should be directed to clear, largely unobstructed space). Open boxes (e.g. for robin or wren) should be well hidden by foliage.

Having some shade, at least for part of the day, will help to keep the temperatures down. However, we don't seem to have lost chicks due to high box temperatures.

Nothing to do with nesting, but the story is that a blue tit discovered how to drink milk from front door steps in Southampton during the late 1920s and then passed on the knowledge to others, spreading north throughout Britain (Oh how we laughed!).

This is a another myth that has been mentioned on Springwatch. I think stories like this reveal more about us humans, than they do about animal behaviour.

Firstly, there is the availability of the right kind of milk, in the right kind of container. As a child growing up in a working class family during the 1950s & 60s, I can say that blue tits started stealing the cream from our milk about 1961.

They didn't do it in the 1950s because no one in our street had a refrigerator. So our neighbourhood only had sterilised milk delivered in glass bottles with hard metal [beer] caps.

In the early 1960s, dad brought home our first fridge (a second-hand gas fridge, not electric) and we started having full-cream milk delivered with thin foil caps. And that is when blue tits discovered the pleasures of cream in our part of Essex.

I wasn't around in the 1920s but I think milk was delivered in wax cartons. Without refrigeration, fresh milk was unlikely to last more than (say) 24hrs. So I don't know how widespread deliveries of full-cream milk would have been at that time (e.g. the socio-economic angle).

Anyway, I think the simple explanation is that birds forage for food. Many blue tits (and other birds) discovered this in many separate locations, as and when the right kind of milk became available in an easy-to-open container.

But don't take my word for it. Take a look at the conclusion of a BTO report with the rather racy title: "Tits and Milk Bottles Enquiry 1939-1946" which states: "...it seemed likely that the habit had arisen de novo on an average at least once per vice-county, and perhaps more than this..."

Yeah, I had to look up "de novo" too, which according to Wiktionary, means "from the beginning," "afresh," "anew," "beginning again."