I was looking for a phone app that would identify bird song.

I have a de-Googled phone, so it needed to be one I could install from an APK package.

And of course, it had to be free.

We walk a lot in the countryside and like to identify any animals, insects and birds that we encounter. Sometimes we hear a bird singing in a tree or hedge, but are unable to see it.

Another problem is that most birds have a variety of songs and calls. For example, we can recognise the classic chaffinch song, but are not so good when it comes to its range of calls.

A few weeks ago we installed the bird ID app "Merlin" on my wife's Android phone. It seems to work well, so I looked at ways to install it on my LineageOS Google-free phone.

Being Google-free, I don't use them to install apps. I normally use F-Droid, but in this case Merlin is not listed, so I installed Apk Extractor to create a package and transferred it to my phone.

It seemed to install without problems, but when I run it I get some kind of 'app keeps stopping' error message. So far I haven't been able to find a solution and fix this problem.

A friend suggested I try the BirdNET app. So once again I installed this on my wife's phone from the Play store and ran Apk Extractor. This successfully installed and runs fine on my LineageOS phone.

The first obvious difference between Merlin and BirdNET is that Merlin seems to analyse the recordings on the phone, whereas BirdNET sends the recording to a German server and then waits for the result. This is fine if you have a good internet connection, but can be a pain if you have a poor one (maybe you are standing under an oak tree, in a forest!).

However, you can save any recordings for analysis at a later time.

At first I didn't understand how to save recordings, but this worked fine after I added "storage" to the existing app permissions, which by default were "location" & "microphone".

Having access to two bird ID apps means I'm able to compare recordings on both systems. I also use https://www.british-birdsongs.uk as a source of bird song to test the apps.

It soon became apparent that there may be a few identification issues. Using BirdNET in the field and with the recordings from British-birdsongs its clear that the app cannot tell the difference between carion crow and hooded crow. We don't generally get hooded crow here in southern England.

Using BirdNET in a field test while listening to a common wood pigeon, the app thought the bird might be a collard dove 50% of the time. However, when using the song from British-birdsongs it correctly identified both species. So more investigation is required.

Note: the wood pigeon makes a sound like a bored football fan; "uni-ted, uni-ted". While the collard dove sounds like Frank Spencer; "my head hurts, Bet-ty".

Using British-birdsongs, BirdNet classifies both swallow and house martin as swallow, but does recognise a swift. It recognises a common buzzard, but not a honey buzzard. It thinks a red kite could be black or red, but correctly identifies a black kite call.

BirdNET cannot identify that rather annoying Rose-ringed Parakeet that is spreading out from west London into the home counties. It is not listed in the apps list of likely birds for our area. (But it is listed & recognised by Merlin)

October is not a great time of year to hear bird song, but I tested BirdNET using some common bird song recordings via British-birdsongs and the following seem to work fine:-

BirdNet could not suggest a species for the willow tit song, and seemed confused by the blue tit song (although the latter recording didn't sound right to me).

If there are people nearby talking, BirdNET may give this response... 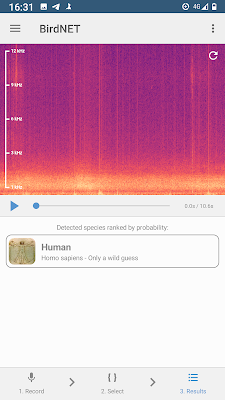 BirdNET could do with a "swipe left to delete" option for recorded Observations (you have to open each one and delete individually).

By reference to "Explore your area" I can see that the bird list is limited to a likely list of birds you may see within about a 25 mile radius of your current location. I'd like an option to adjust this range.

BirdNet uses bird names that I would describe as international. This is very tedious because most common British birds are prefixed with either the words "European" or "Eurasian". I would much prefer a localised list of names; e.g. simply "Wren", "Robin", "Blackbird" instead of "Eurasian Wren", "European Robin", "Eurasian Blackbird" & so on. A link from each bird takes you to a Wikipedia article which gives the full international name, which is fine and removes any doubt about the actual species.

I would prefer BirdNET to do the analysis on the phone and not have to rely on an internet connection. But generally I like most of the screen layouts and the information provided.

It would be a-nice-to-have if the user could re-order observations in simple alpha name order. This would also require the removal of tedious prefixes like; Eurasian, European, Common, & so on. Or names could be changed, e.g; Wren (Eurasian), Swift (common)

I like the location map, but its a pity it can't be stretched by the user to occupy the full screen.

Visit this website for more information from The Cornell Lab.