My printer stopped printing part way through a print!

I'd never experienced this before...

...and I'm still not sure what the reason was for this problem.

After quite a long period of trouble-free printing, I ran into this new problem.

I was trying to print a small model of a house that someone had designed on Tinkercad. Since the estimated print time was > 20 hours, I scaled the print down to about 60%, reduced the infill to 10% and changed the infill pattern to lines.

Once it had started printing and was looking OK, I walked away from the printer. But when I returned some time later, the printer had only printed a Brim and the base.

It was still going-through-the-motions although nothing was being extruded. The extruder was grinding away at the filament, but the filament was not moving.

So I stopped the printer, removed the partial print, rotated the extruder cog to eject some PLA and set it off again. The same thing happened. Once the printer had printed the Brim and the base, it started on the infill but quickly stopped extruding PLA.

I did a few more prints, and for each attempt I increased the infill by 5% and also changed the infill pattern. 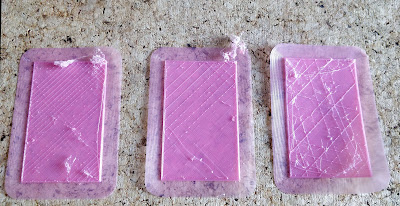 After setting the infill to 35%, the printer behaved itself and all was good. 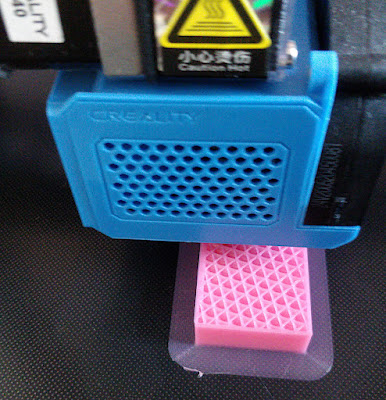 Needless to say, I then started reducing infill % without any issues.

so what was the problem?

Up until now I have struggled with the idea that PLA can block the nozzle. After all, it melts nicely below the normal extruder temperature of 200'C, so surely the extruder would automatically clear itself by the time it was up to operating temperature?

But maybe this isn't the case. What exactly is in PLA?

I know that some PLA reels contain dyes and even additives like aluminium, carbon fibre and bamboo. So maybe its the additives that accumulate and block the nozzle.

What appeared to happen in my case was that (maybe) the nozzle was partly blocked. At the start of the print the extruder was delivering a relative large quantity of filament, but maybe the demand reduced after completing the solid base and it consequently blocked ...doesn't sound very convincing, does it?

Three other points to note.

About 2 weeks ago I used some Tinmorry black PLA. What struck me as a little odd was that I did a 2 colour print starting with black. Mid-way through I changed to pink PLA and purged the extruder as normal, but when the print continued it came out as a dirty black pink, not just initially, but for the remainder of the print. So I wonder if some of the pigment or other additives remained in the extruder.

The second point is that a few days before making the first of the "house" prints above, I discovered that the trans-blue filament in the machine had turned very brittle. I managed to print with it OK, but its now very difficult to straighten to feed into the extruder, because it just breaks.

So it could be a blockage problem related to either the black or the trans-blue filament ...or none of the above.

One other variable is the print fan, which does not run when the printer starts printing, but turns on after the printer has finished the Brim and model base. Although this fan is not supposed to cool the nozzle, it is difficult to see how this can be avoided, as the fan is fitted so close to the base of the extruder.

Actually, the fan is not much of a variable as it always turns on after the initial print layers are complete. But maybe its cooling affect is just enough to tip the balance in the case where there is some kind of 'partial blockage'.