I thought our Sony smart TV was suffering from early onset dementia.


It seems to have forgotten how to provide any kind of catch-up tv.


So I've had to look around for alternatives.

It doesn't seem 5 minutes ago that I was writing about my new Sony Smart-arse TV.

Ok, it turns out to be over 7 years ago, but its still disappointing that support for BBC iPlayer has now been dropped...along with Channel 5, Amazon, YouTube and probably a few others that I haven't noticed yet.

The only useful (to me) 'smart' features left are its ability to pause (spool) video and its continued support for Netflix.

You could argue that I should just go out and buy a new telly, but why send a TV to landfill when it still returns a great picture? And a new TV could also go out-of-date in the next 5-10 years.

I had another look at Blissflixx, which had been great until the BBC started fiddling with iPlayer. Every change seemed to require a hardcoded change to Blissflixx, as it seemed to be looking for a known website layout, rather than being able to adapt as the site evolved. Then there was a problem with registration/passwords... so the whole thing just got too complicated.

We did run an old laptop under the TV for a few months. I'd set this up with Firefox on PeppermintOS so we could just select the site we needed to play catchup (e.g. iPlayer, All4 & so on). But getting down on our knees to select programs, run/pause & so on, was a hassle us oldies could well do without.

I looked at a few options which required you either to pay a subscription or put yourself in Googles pocket. None of these options appealed to me. I just wanted something like a Linux box with a remote control.

I read a bit about Freeview Play, and then stumbled upon the Manhattan range of set-top boxes, so I splashed out £79.


With this box connected to both the internet and a TV aerial, it runs as a digital TV tuner with the usual selection of 85+ stations (about 10 that you actually watch occasionally, and 75+ that are a complete waste of the electro-mag spectrum).

You can also look for programs on iPlayer and the other catchup services. Or you can select Explore FreeviewPlay and browse programs by category (e.g Comedy, Movies, Factual & so on) which basically groups together content from all the catchup suppliers. 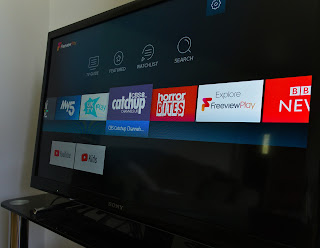 Sometimes it is possible to play-from-start a program (e.g. if you missed the beginning) but I think this is currently only possible on [some] BBC programs.

You can teach the box controller some of the functions of your TV's controller, but we haven't bothered to do that yet.

This box also does some clever scheduling/watchlist stuff, but you'll need to check the details for yourself, as that's way above my pay-grade: https://manhattan-tv.com/freeview-play


So what's missing from this box?


TV pause/spooling; You can't pause TV with the T3, but this should be possible with some of the more expensive models. It would be good if there was a model that could do pause/spooling to an external hard drive connected to the USB socket (just like our TV).

TV channel sorting; You can create a favourites list, but there is no way to sort TV channels by your preferred order (in our case; BBC One, Two, Four, BBC News, Film4 & so on).

Audio output; if it had an analogue stereo output, it could be used with a monitor and separate audio amp. But I wouldn't want the price to increase on the basic units just to support this.

TV to box cable; in our case, we need to be able to use the TV direct sometimes (e.g. when needing to pause TV) so I fitted a male to female co-ax which I already had.


I'm also using a router to provide ethernet from a single wall socket to both the Sony TV and the Manhattan box. This is only powered up when I throw the wall switch, which now turns on: TV, set-top box, DVD player, router & audio amplifier!

Checking the power consumption with this setup switched on I get;
*Using standby mode which enables the aerial loop-through.
Note that I could use wifi for either or both devices, but this sometimes 'spools'.

So the best two modes are #2 when watching TV, and turning the wall switch off when we are done.
Posted by SteveDee at 15:00