With an improvement in the weather, I thought I'd try a bit of night-sky photography.


One thing I've never attempted is taking time-lapse photos and then stacking them to produce star trails.


I used a RaspiCam for the photos and Gimp to stack and process them.

It all started when I tripped over my old tripod mounted transportable Pi camera in the garage. This has generally been used to take 90fps video clips of garden birds which are then played back at about one third speed. 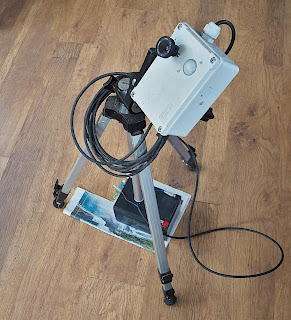 The RaspiCam in this unit is the one without an iR filter, but I suspect results would be similar with a standard Pi camera. The lens in the photo is a rather nice 16mm jobbie, but the angle of view is probably too narrow for this kind of photography, as you will notice from my initial results.

I made a few simple changes to my Gambas software that runs on the Pi to add a time-lapse mode. For this application the program basically runs a "raspistill" command, based upon an adjustable timer interval, with the appropriate camera settings. I probably need to add some further adjustment to this to allow for variations in ambient light (e.g. the moon). Maybe a control to tweak the "ev" level would be enough.

For my first attempt I took 10 shots at 1 minute intervals, opened them as layers in Gimp, set the "layer mode" to "Addition", merged the layers down to a single layer, and finally adjusted "levels" to restore contrast & brightness.


Not exactly star trails. I didn't expect the stars to 'move' quite so much in 60 seconds, and I clearly need a wider angle lens to help join the dots. But other than that, I'm quite pleased with the results.

I need to fill in the small gaps between the camera board and the lens mount base to stop ambient light getting in (maybe use thick black paint or perhaps just BluTack). This only happens on my camera because I replaced the original lens mount.

I reduced the interval between shots to 30 seconds, and took a sequence of 65 photos with the camera pointing in a northerly direction. 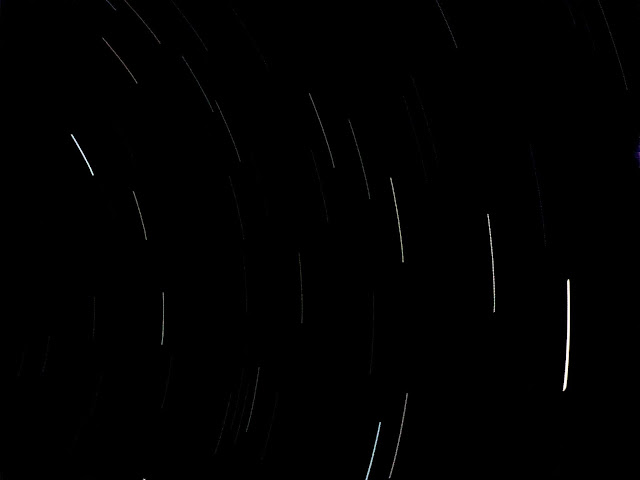 With the camera angle closer to 90 degrees (vertical) the relative movement of the stars is much less, so the 'dots' almost merge into lines.


For the first series of shots, I used the following RaspiCam custom settings:-
Other RaspiCam settings were left at their default value.

For the second image above, I increased the sharpness setting (-sh 40) and reduced the shutter speed to 3 seconds. There is a lot of scope for experimentation with these initial values.


Stacking the images in Gimp and adjusting the 'levels' is quite simple, but I've hacked a Script-Fu script to speed up the process ...I'll describe that in a subsequent post.
Posted by SteveDee at 07:33