The Covid Crisis has resulted in an unexpected benefit...


...a dramatic drop in traffic noise.

We have an increasingly busy road at the front of the house, and a very busy dual-carriageway out the back. But now that we are almost through the first week of 'lock-down' it is remarkable how quiet it is out there.

No planes overhead approaching or departing from Gatwick, and the number of cars has dropped to what, pre-1960 levels? So we can really hear our garden birds as they rev-up for spring.


About 2 weeks ago I connected a 12V battery to the Maple Tree cable, turned on the wifi router & time-server and wow! ...the system still works! Despite all the heavy winter rain, which has even found its way into our house, my old Pi powered birdbox is still working. Built in the winter of 2013/4, this is now its 7th season.

It has a 32mm entrance hole, so would be difficult to defend by blue tits & great tits from larger birds. In fact it was built on the off chance that a nuthatch couple might take an interest. In 2018 there was a dramatic take-over by great tits, and the resident blue tits were booted out.


From the middle of last year we started to notice a great tit around our feeders with a very distinctive white tail. It looks like someone has grabbed the little bird and used it to stir a tin of white paint.

For several weeks before we switched on the box camera, we noticed a pair of blue tits visiting the box. 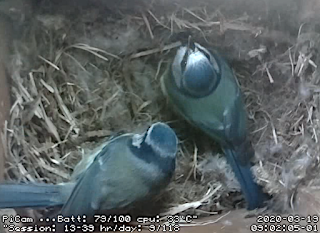 We have even seen a wren checking it out... 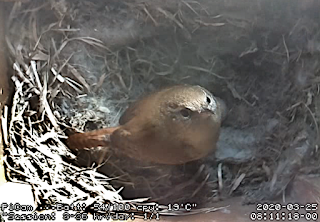 And with all this activity, one of last years unsuccessful great tit eggs has risen to the surface...

But just in the last few days "white-tail" has found himself a girl friend and now taken full control of the box. In this very low frame rate video (below) the female removes the old egg and later comes under attack from a bird outside the box.

Although blue tits seem to be almost impossible to sex, we normally manage to spot differences in great tit couples. This great tit couple should be easy. Although the white tail of the male is less distinctive than it was, its overall colouring is less vivid than it is on his mate.


So we are now hoping that this great tit pair will hold the box and successfully raise a family (...and we hope the technology will last, at least for the 2020 season).