Our conservatory has been a great asset for the last 15 years, but there were one or two issues we needed to address.


In addition, the crazy high temperatures during this summer have made it a no-go area during the hottest hours of the day.


So a couple of months ago we started thinking about refurbishment options.

Our conservatory was originally supplied with a polycarbonate roof with an opening roof window. For most of the summer we can keep the room cool enough by opening all the windows & doors, and running a ceiling fan.

But if the room is shut up while we are out, temperatures well over 40'C are common place at the coolest end of the room where our max/min thermometer sits in the shade. However, this summer, with days and days of outside temperatures in the 30s, even with the conservatory 'fully-open' it was too hot to use. 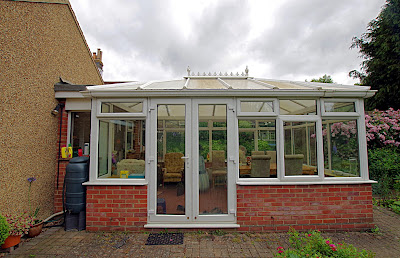 I started to think about ways to keep it cool and came across several companies selling roof modifications. Some were simple, while others involved completely removing the original roof and fitting a new solid one  ...which I decided was way beyond my DIY abilities.

After days of research I shortlisted just 2 suppliers:-


Having spoken to both companies, I felt that either one could provide an acceptable solution. However, we chose Country View as they provided the lowest quote.


why would you want to do this?

This is a relatively expensive modification. For a 5m x 3m conservatory with a double hipped roof, the cost is the wrong side of £10k. But our conservatory is our #1 daytime room for most of the year. In the winter we still use it, but may have to run the electric heater for an hour or so first to pre-heat the room. If its really cold and there is no sunshine, we have to run 2 heaters at full blast!


The main benefits of fitting a well insulated solid roof include;

One of the most successful is the noble false widow spider which has a rather unpleasant venom. With a proper plastered ceiling there are fewer places for these pesky spiders to hide, and less bug-traps. So I hope we won't continue to get insect carcasses and live spiders dropping onto the dining table while we are having lunch!

There are other benefits to us in replacing the roof;


During the 6 weeks lead time between placing the order and installation, a surveyor takes careful measurements of roof angle and various linear measurements of the conservatory. This data is used to manufacture the new aluminium frame at the Guardian factory in Portsmouth. He also needs to satisfy himself that the existing foundations are deep enough, and generally has to dig a test pit to verify this.

I did some simple preparation before the 2 installers arrived, including clearing the room of furniture, isolating the lighting and power circuits, disconnecting and unbolting the wall heater, removing the ceiling lights & fan, and moving clutter away from the exterior walls, including a water-butt & assorted pot plants.

I decided not to pay for an electrician to install ceiling lights. Initially I was going to do this myself, but eventually decided not to bother at all. We very rarely used the original ceiling lights, so I'll just fit a single wall light and mostly make use of a 6ft floor standing up-lighter and other 'mood' lights.

Within about 45 minutes of arriving, Sam & Wayne had removed the old roof... 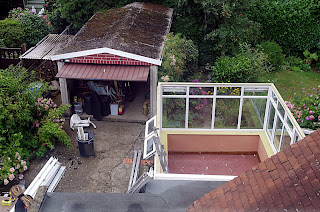 ...and they soon assembled the new frame... 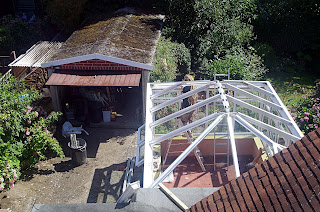 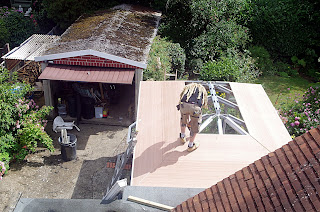 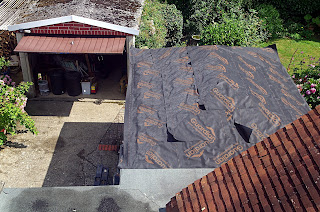 So by the end of day #1 we had a cosy rain-proof roof. 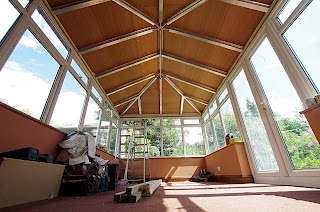 Progress on day #2 was less successful, as the installers had not been provided with enough materials. However, they part-laid the slates which gave us a good idea how a charcoal grey roof would look when finished. 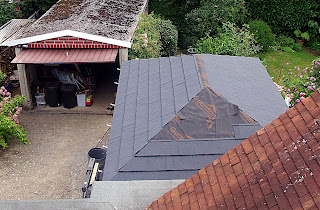 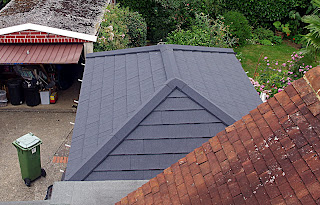 ..and just needed guttering, a final 80mm layer of insulated plaster board, and a plasterer to finish off the installation. 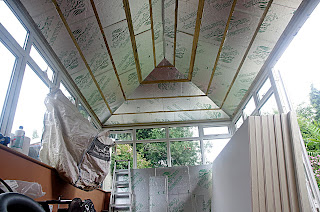 Installation was completed on day #4 and by lunchtime Friday (day #5) Lee & Dave had fully plastered the ceiling to a very high standard. 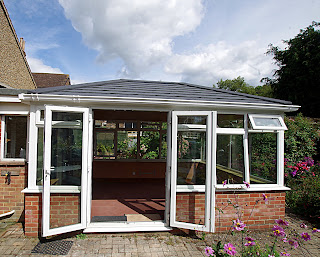 All timescales, including the lead time, appear to have been conservative (which is a good thing).


This sort of modification comes under Building Regulations control. The Guardian system meets these requirements via LABC certification. I understand that IconRoofs use LBC on a per installation basis, so there is an on-cost of £300-£400 to cover this.

Many of the lower cost solutions do not comply with regulations, and may create problems associated with condensation.

Planning Permission may be required if the local authorities deem this modification changes the building from a conservatory to some other form of house extension.

Some people apparently remove the back door connecting the house to the conservatory, and even plumb conservatory radiators into their existing heating system. But by definition, a conservatory must be thermally isolated from the house, otherwise it is considered to be a house extension.

Another consideration is security. It may only take minutes to remove an externally glazed panel (as typically installed to a conservatory) from a window or door.


It is going to take a while to determine whether our modified conservatory lives up to expectations, but it certainly looks great!

It has definitely reduced much of the high frequency content from traffic noise, but obviously the low frequency rumble remains. We also seem to get a clearer view of the garden as there are fewer reflections on the glass, without light coming in from above.

The next stage is to paint the ceiling, lay a wood-laminate floor and replace/renew the skirting boards.

We also plan to fit a Velux Sun Tube into our kitchen roof/ceiling to raise the light level. Something we should have done years ago!
Posted by SteveDee at 16:47