Thunderbird on Peppermint OS: invasion of the giant emojis

Another annoying quirk I found during my recent evaluation of Peppermint OS (V9) concerns the email client Thunderbird.


But this very minor issue has a number of easy fixes.


Having reduced my computer herd down to just 5 head of laptops and 1 desktop Raspberry Pi, I'm evaluating Peppermint OS on 2 laptops. The object is twofold; (i) to see if this OS is a better choice than Ubuntu for my wife, and (ii) to see if its a better choice for me than Lubuntu.


The giant emoji problem looks like this when viewing your inbox in Thunderbird... 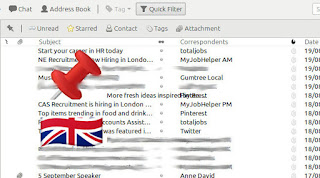 ...which as you can see, not only creates huge emojis, but also shuffles the subject text along, making it difficult to read.

There are a number of simple solutions to this issue which mostly involve installing and/or removing stuff. The fix I've settled on is simply to install fonts:-

Thunderbird now renders some emojis as a black & white version (e.g. the pin above) or something simplified (e.g. the Union Jack is simply displayed as GB).

other options ...which I have not tried


According to zebedeeboss on the Peppermint forum, if you uninstall...
fonts-noto-color-emoji

According to PCNetSpec on the Peppermint forum, if you really want regular sized, colour emojis just download and install...


It looks like there are some basic libraries missing from Peppermint which is to be expected in a 'light' Linux OS. I just wonder if they are going to correct these issues via a simple update or allow new users to just keep tripping over them.

One of Peppermint's principles is that you cannot upgrade from one version to another, you have to do a complete install instead. This has some benefits, but if your particular configuration involves lots of tweaks to overcome issues or for personal customisation, it could be a bit of a pain!
Posted by SteveDee at 08:15