Robots are coming! (...and the future is looking grim)

We live in a very exciting age, with scientific discoveries, inventions and technological development moving at an incredible pace.


The next few decades are likely to produce products which will really help humanity, especially in the field of medicine.


But what will happen to us and the world we live in, in the longer term, say in one or two hundred years from now?

What kind of life do we expect our children's children to experience in the 22nd century? 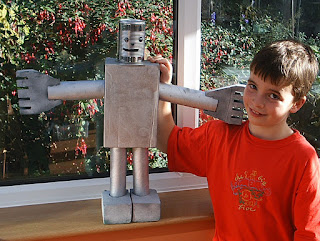 With the rapid development of artificial intelligence and robotic systems, jobs will disappear as the activities of those engaged in sectors such as finance, retail, legal services, manufacturing and transport are steadily replaced by bots, robots, personal assistance devices and self driving vehicles.


The optimistic view seems to be that we have been here before. We have lived through the disruption caused by revolutionary developments like the wheel, the printing press, and every last mechanical gizmo created by the Victorians during the industrial revolution.

The optimists argue that [in the past] we have simply found new products to develop, manufacture, sell and service. That instead of these developments creating unemployment, we now have more people employed than ever before. People's lives are better because there has been a shift from hard work (e.g. mining, breaking rocks & shovelling sand) to soft work (e.g. sitting at a desk, operating a computer or just talking to people).

They also argue that humanity has a way of finding solutions to problems, and therefore we shouldn't worry about the future. We will work through the issues as they pop-up and just deal with them.

It is crazy to compare the Industrial Revolution of the 18th and early 19th century with the rate of change that is happening today. Although the long term effect of industrialisation and "progress" has resulted in improved living standards, lower infant mortality and longer life expectancy, it did create hardship for large groups of people directly affected by the consequential changes resulting from developments such as automation.

More recently, following the mass pit closures of the 1980s in the UK, many fit & able people never worked again.


Those that benefited the most (and most immediately) from the Industrial Revolution were the middle classes. Ordinary people in the western world continued to suffer from the effects of "progress" for several generations, before seeing real benefits in such areas as housing, education and employment.

And of course, millions of people in the developing world are still suffering, and still waiting for benefits to filter down to them.

So why give robots a hard time?


If you imagine a world where vast numbers of graduates are employed in dreaming-up applications and designing robots, while a substantial army of technicians and engineers build & maintain them, then everything in the garden is rosy!

However, it won't be like that for long. AI systems will eventually create the designs and develop the systems (robots if you like) to carry out any task imaginable (...or any task that there is a market for, always assuming that ordinary "non-working class" people still have money to spend). Not only will jobs [for real people] disappear, but new ones will not be created, because systems and machines will pick them up from day one.

Its easy to imagine a world where little or nothing needs to be done by humans because it can be done easier by intelligent systems.

We can work it out


Even so, a bunch of clever people will sort out the logistics of who works, how people either earn money or how they are allocated it, and other boring stuff like that ...won't they?

If it is true that we are creating global warming by our daily activities, we should have taken positive action by now to reverse the situation. Politically, we have just been kicking-the-can down the road. The Americans appear to have grown weary of kicking, and are now resting on the kerb.

In almost every major town or city in Britain you will find large numbers of unemployed young people. This unfortunate status often results in vandalism, petty crime, gang culture and other forms of antisocial behaviour. Has humanity found a solution to this widespread problem? No, of course not.

There are religious and nationalistic disputes still alive and well today that have been rumbling along for generations. Don't expect anyone to sort these out anytime soon.


So no, it is more likely that humanity will wait for the guano to hit the fan before attempting to deal with the problems that are heading our way.

But aren't you just an old dinosaur?

Old people will always talk about the good ole days, and fear what the future may bring, not for themselves, but for their children and grand children.

You could take the view that the future will sort itself out, just like the occupants of Easter Island in the 17th century, or those benefiting from the power and wealth of the Roman Empire 2000 years ago.

There is always a possibility that our tech-empire will collapse simply through lack of forward planning & action, and our world will fall into a new Dark Age due to the terrible consequences of widespread boredom and social inequality.

Have a nice day!