Domestic LED lighting is a far better alternative than incandescent or flourescent lights.


LEDs produce light while generating practically no heat, and they seem to last forever when used in electronic equipment.


So why have 2 of my expensive bathroom LED lights gone kaput?

LEDs were first introduced 55 years ago, but it took a long time to develop a range of colours (including white) and create a viable alternative to traditional domestic light bulbs. I must have started using LEDs soon after joining Marconi (...I mean the company, not the Italian geezer) in the late 1960s. I don't remember ever experiencing a failure in use, although I may have blown one or two up by slapping them directly across a 9V battery.

It is only in the last few years that LED bulbs suitable for direct connection to 240V a.c. have become widely available. But it is those little ones that run from 12V that are the subject of this post.

We have 2 bathroom/shower rooms using 7 of these bulbs. One started randomly flashing about a year ago, and a second started the same nonsense a couple of weeks ago. I decided to take a closer look at this second failure, which fortunately has two cross-head screws holding the base to the rest of the body. 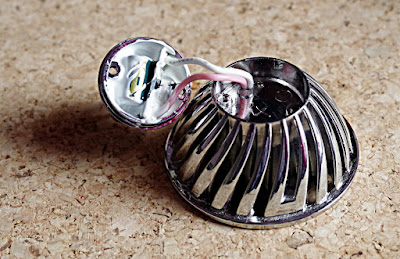 Once opened I could see an interesting looking pcb buried under white silicone rubber. This took a little while to remove using a Stanley knife and snipe nosed pliers. Turning the board over I noticed a block of black potting compound. This was a touch more trickey to remove. 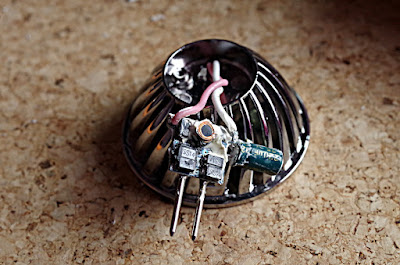 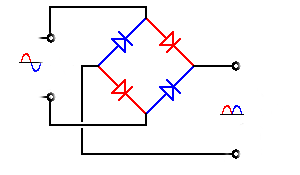 During the negative half cycle, the current now flows through the diodes coloured blue for the same reason. So the output waveform becomes a series of positive going humps. Once these humps are smoothed out via a suitable capacitor, you can hardly see the join. But the other interesting thing is that the d.c. output voltage becomes 1.414 times the a.c. input voltage (a.c. voltages are generally measured/quoted as r.m.s. values which are lower than the peak, buts that's another story).

Now the old a.c. transformer that drives my LED lights was really designed to drive halogen bulbs, which draw a higher current than LEDs. It doesn't seem to have output regulation, which means that the output is about 11.5V when fully loaded with bulbs (a total of 70W). 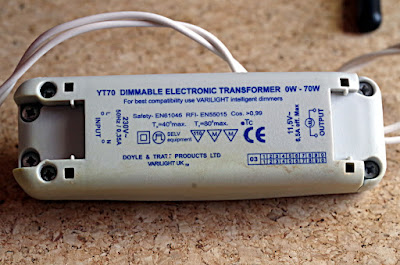 But the LED lights don't consume that much power, so when I measured the tranformer output, the reading was over 30V a.c. And since the diode bridge increases this 1.4 times, the LED circuit is probably seeing over 40V d.c.

Now remember I said the ic on this board was a 1360?  If we look up the datasheet for the 1360 the maximum input voltage is 40V. Although it is possible that there is some extra protection built into my LED light circuit, I rather doubt it. So I'm prepared to conclude that I'm operating some of these LEDs on too high an input voltage.

Next stop Amazon, where I bought a couple of these fancy LED power supplies. 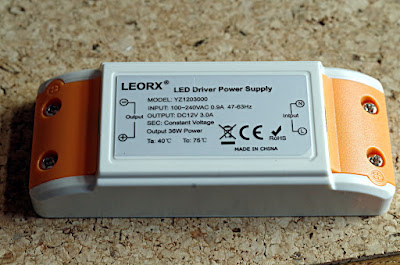 These produce a regulated 12V d.c. output, so no worries about blowing up the LED driver circuit.

If my new LED (to replace my failed unit) also has a bridge rectifier, it will work with a.c. or d.c. When running from d.c. the current will only flow through 2 of the 4 diodes (because the current direction is not alternating). But with a d.c. input, each of the 2 conducting diodes will drop a small voltage, which according to the datasheet this is 0.5V. As there are 2 diodes in series, the 12V supply will only be 11V within the LED circuit.

From the SS14 datasheet it also looks like these diodes may fail if the supply rises above 40V. So once I've replaced all my old a.c. transformers I hope my LED lights will last much longer...

...although probably not forever!
Posted by SteveDee at 12:41