Every so often I get seduced by the promise of faster wifi with wider coverage from a shiny box with 3 aerials.


It usually ends in disappointment when I discover that the new contender is less stable with lower coverage than my old trusty Netgear DG834G.


However, the latest candidate is not too shabby, and it gives me access to both the 2.4GHz and 5GHz wifi bands.

I know it sounds crazy that my old Netgear has been the gold standard for so long, but it has been so loyal!

Routers can be rubbish


Even the DG843G had a really shaky start, because for the first 12 months we noticed that if it went down, it was a real pig to restart. We had to flick the power off/on 7 or 8 times to get it to boot-up.

Eventually I found the time to give it a close look and discovered that the 12V power supply was pushing out less than 7V. 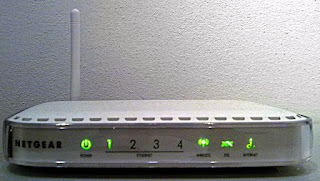 Once the power supply was replaced, its been as good as gold.

Along the way I bought a Netgear DGN2200v3 which kept dropping the internet, a D-link which has been great on for my birdbox network, but I could never seem to get it to connect to the internet, and now a TP-Link Archer D2.

Judging by the reviews on Amazon, it is possible that maybe 5% of low-cost consumer electronics arrives at your door with some kind of fault (just like our Netgear power supply). Whether this reflects on an inadequacy in final production testing, or whether the percentage is inflated by returned items being 'pushed-out' again to new customers, I'll let you decide.

All hail the Archer


I think I've had the Archer long enough (well, 4 weeks actually) to say that it is reliable. However, it does not seem to give the range/coverage that I get from my DG843G. This is despite having 3 sexy rods instead of the old Netgear stump. I managed to improve the range a little by resting Channel Width from "auto" to "20MHz" [citation needed].

So with the Archer I can run both 2.4GHz and 5GHz access points. I can also throttle the bandwidth so that my video machines get the lion's share, my laptop gets lots, and any visitors to our house get whatever drips out of the tap.


I've even stuck a mico-memory stick in the Archers USB socket, so that I can push the odd file up there for later retrieval on another computer. This is proving more useful than I expected.

The move to 5GHz


As the 2.4GHz band is locally flooded with access points, I was hoping to shift some of my stuff into the 5GHz band, which at the moment is completely empty of local traffic.

Unfortunately neither my Asus laptop, or my wife's new HP455 support 5GHz wifi.

Rather strangely, an ancient HP nc6320 (about 10 years old) that I have kicking around does work great on Linux on this band, although the Win 7 driver seems unaware that it is 5GHz ready, and the wifi label just says 2.4GHz.

It was a big disappointment to find that my Smart-Arse Sony tv does not support 5GHz, as this would have been the first candidate.

Another target would be my KitchenPi. This sometimes drops its radio stream during breakfast time. I think the main culprit is our microwave oven which sits directly in line between the router and KitchenPi.

At some point, a cup of coffee gets a re-heat, and we lose John Humphrys!

5GHz wifi on the Pi


Of course for KitchenPi I need a 5GHz solution for the Raspberry Pi. And once I have this working I can upgrade BlissFlixx and my birdbox wireless network.

After practically no research, I purchased an Edimax AC600 wifi dongle (mainly on the basis that I've used loads of the Edimax EW-7811Un dongles and they have been great).

Once inserted in a USB socket, the AC600 sticks out almost 30mm, which is about 20mm more that the nice dumpy little EW-7811. Running lsusb indicated that the new dongle was recognised, but lsmod did not list a suitable driver.

So I trawled the internet and discovered MrEngman has been making a name for himself in the dongle world over on the RaspberryPi forum. He (or is it she) has very kindly compiled and made available via Dropbox a bunch of wifi drivers.

I guess he recently got fed up explaining to people how to install, because he has now taken it one stage further by creating a script to do the thinking for you.

So with your Raspberry Pi connected to the internet (ethernet or a working dongle) also connect the AC600 dongle;


Once this is complete, power down the Pi, remove ethernet or working dongle (leaving the AC600 in place) and then restart.

You will need a relevant wpa_supplicant configuration file, so in a terminal:-

The screen output will be in this format...

...but obviously not the same, since you will be using your actual 5GHz routher/wifi settings for password and ssid.

Unless you are some kind of command line Trog, I suggest you open file manager as root via terminal:-

...and then navigate to: /etc/wpa_supplicant

Right click on this file to open with LeafPad, gEdit or whatever text editor you use.

Leave the first two lines + one blank line in tact, and over-write the rest with your passphrase stuff;


Your default: /etc/network/interfaces file should be OK as is. But if you get any problems, refer back to my earlier post re: configuring wifi on the Pi.

Now when you re-boot with just the AC600, the Pi should connect to your 5GHz access point!


Obviously the high bit rate only applies within my local network. Using 5GHz wifi is not going to "speed-up" your internet from 20Mbps to 434Mbps (even the chubby Yorkshireman that provides our internet can't work that kind of miracle!).

The only other problem you might have is if you have already used a wifi manager on your Pi. You may have to open wpagui and confirm the selection of your access point. But this probably only applies if you have more than one entry in wpa_supplicant.conf.

iw is the new iwconfig


If you have the package iw installed, you can check wifi details in a terminal:-

If your dongle supports 5GHz it will be listed under Band 2 showing frequencies and channel numbers. It will also show supported bit rates.

You can also get channel & frequency information using the old iwlist command:-

...where wlan0 needs to be replaced by the name of your wifi interface.


It is early days, so I have plenty of testing ahead of me to determine pros/cons for devices and their applications.

One weird problem I have already noticed is with KitchenPi. If I stream Radio Caroline using this command:-

..it only works fine on 2.4GHz. On 5GHz it only runs for a couple of seconds, then I get messages like:-

Needless to say that playing with cache settings does not help.

I've searched the net but so far found nothing helpful. Not even sure what question to ask or where to post it!

Any ideas, then please let me know.
Posted by SteveDee at 11:08