Quite by chance, I spent a few hours last Saturday, lifting carpets and floor boards.


The signal on one of our TVs had been a bit iffy for some time, with a tendency for the picture to pixellate on some of the weaker channels.


I put this down to the ancient, brown, co-ax cable running down from the distribution amplifier at the top of the house, to the Sony in our ground floor middle room.

So, having purchased 25m of cable from TLC, I worked out the easiest route to lay the cable from the bottom to the top of our three storey house. This involved lifting a few floor boards on the ground and first floors.

Once the work was completed, we had a perfect signal on most channels and a good signal on the rest.

A note about multiplexes


Digital television channels are transmitted in groups know as multiplexes. We receive our service from the Midhurst transmitter, and multiplex BBCA includes all the standard resolution BBC channels. The BBCA multiplex gives us the strongest reception. 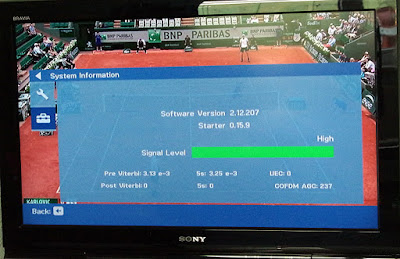 Although the D3+4 multiplex is transmitted with similar power to BBCA (20kW) the channels in D3+4 have tended to be slightly weaker.


TV reception remained good on all TVs and all channels from Saturday evening until Monday. We switched on at 6pm to catch the news and found channels were either severely pixellated, or just reported "no signal".


The problem didn't appear to be related to my re-wiring exercise, as all outputs from the distribution amplifier were the same. What I did notice was that the "short circuit protection" light came on when I connected either of the two Sony TVs. 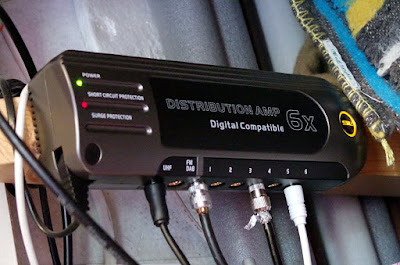 I bypassed the amp and connected straight through to one TV. That gave us watchable reception of BBCA channels, but everything else was rubbish.

I found an old TV amp and connected it in place of the other one. It was just as bad. I took the amp downstairs and tried it close to the TV (because I was getting tired walking up and down the stairs) and found it worked much better.

This was all very odd. Just before retiring to bed I decided to place an order on line for a new distribution amplifier.


The following morning I remembered some stuff about 4G on 800MHz, and managed to pull a "Let's be Clear at 800" flyer out of the bin.

I went on line and checked the nearest phone mast locations, and discovered there were two together. Not only were they in-line between us and the Midhurst transmitter, but they were just 400m away, hidden behind trees.

After spending five minutes talking to a nice lady on: 0808 13 13 800 (the free "Let's be clear at  800" help line) she offered to send me a free filter complete with a free engineer to fit it. I declined the engineer.

A couple of days later, the filter kit arrived. 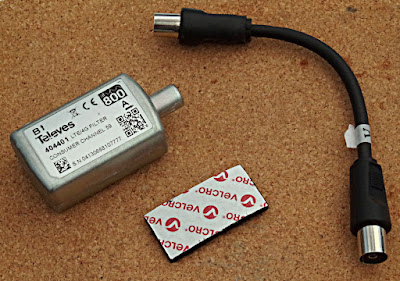 I soon had this fitted between the aerial down-lead and the distribution amp.

We are now back to good, strong reception on all multiplexes. I still have the "short circuit protection" light glowing on my amp, but maybe that's normal.

...what am I going to do with this new distribution amp that I have on order?

So if you have any unexpected interference problems with Freeview broadcast channels, you now know what to do!