This Hat sits on a Raspberry Pi and contains 64 LEDs in an 8 x 8 grid format.


The documentation says that the LEDs are very bright "...bright enough to cause eye pain... possibly retina damage..." ...so I wondered if they had a use in photography.


This post details some experimentation, some Python code, and a few photos.

I'll also mention an alternative way to connect it to the Pi and power the device.


The Pimoroni Unicorn Hat is a multi-coloured display board, where individual LED colour and brightness can be controlled via a Python library. There are also plenty of code examples which demonstrate the flexibility and update speed of this device.

My board turned up inside the envelope of a Birthday card, and it only took me 45 minutes to find the information on Github, download the software, plug the Hat into a Pi B+ and get it running.

Yes, it's bright! When I tell you that the brightness range is 0 to 1 and the demo programs generally use 0.1, this may indicate why I've been nervous about setting it higher than 0.3.

Putting on my top hat, tightening up my white [cable] tie


A Pi Hat is a board that connects directly to the GPIO connector and sits above the Pi (like a hat). This arrangement works very well with the Unicorn for low brightness settings, where the current drawn from the Pi power supply is relatively low.

I took one of the demo example programs and modified it to create strobe.py. 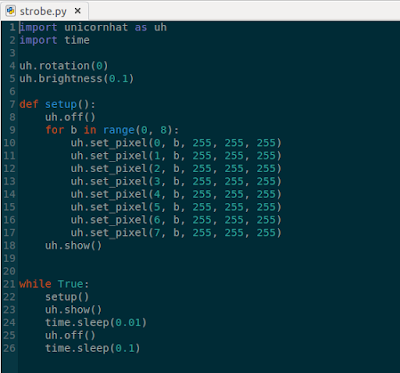 I then took a few test shots with the Pi + Hat hanging over the side of my desk, flashing a short (10ms) burst of light, while trying different repetition rates in the range 100 - 800ms.


I had to fiddle with camera and Unicorn settings until I got something like this...


..which I then turned into the "poster" shot (using The Gimp) at the top of this blog.

If you are pulsing the Unicorn on/off at high brightness, then you are effectively modulating the 5 Volt supply to the Pi...not a great idea!

As I'd like to run my photo-strobe light at high brightness levels, I decided a separate power supply was needed.

Another way to connect


The Unicorn is only driven by one PWM output from the Pi gpio. So I decided to disconnect the Hat from Pi gpio connector and solder my 2nd power supply connections directly to the Hat.

I connected the Unicorn to the Pi with just two jumper leads.

I say "physical pin" to avoid any confusion with gpio Pin terminology.


I also cut one end off of a USB cable and soldered the 5V lead to Unicorn VCC pad and the 0V lead to the Unicorn GND pad. 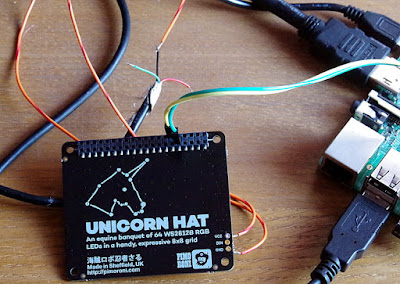 This USB cable was connected to a "Hauwei" phone charger (a 5V supply module at 1A with a USB socket).

I modified the Python code so that all Unicorn LEDs were on continuously, and at each step I manually changed the brightness value in the code and re-ran the program.

I used a basic multimeter to record the following data. 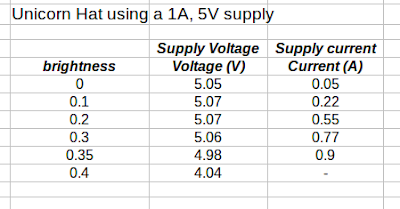 However, I don't need continuous running, I'm just looking for (say) a 10ms pulse with a 200ms repetition rate. So maybe the black Huawei brick will do!

The next step is to put the camera on a tripod, wait until its dark, and then take some more photos.
Posted by SteveDee at 19:24