Our Camray central heating boiler developed a fault about 18 months ago.


Despite our boilerman spending a few hours trying to fix it earlier this year, the annoying little problem has persisted.


However, it looks like my efforts last Friday afternoon may finally have made the boiler behave itself.

Other people tell me that our boiler is a little unusual. Instead of a white shiny box inside the house, we have a black box hanging on the outside wall of our house.

Its been there for 20 years, and we just take it for granted, until it goes wrong!


The problem manifests itself as a series of little explosions or loud bangs. The boiler will fire up, run for a few seconds, stop running, and then "boom"...it fires up with a loud bang.

When this happens at 5am in the morning, I swear you can feel the house shake! If our neighbours are sleeping with their window open, it wakes them up!

The boilerman's take on it


So our boilerman had a crack at it and explained that the boiler was choking itself. Basically the exhaust fumes were getting back into the boiler input, giving the wrong balance of gases, i.e. not much oxygen, plenty of unburnt diesel.

The outlet gasket was in a bit of a bad way, so he did a good job trying to reinforce this by molding gasket material around the flue.

This seemed to improve the way that the boiler ran, but did not completely fix it. As the summer worn on, the "booms" got louder again, and we have been unable to get a replacement gasket.


So last Friday was dry & sunny, and a good day to have a play with it. I took the front cover completely off by removing the hinge pins.


I noticed that the stainless steel grill was loose, and that when the cover was closed, the pressure from the gasket was pushing the grill out from the cover, creating a small gap around the lower edges.

The grill is supposed to be fixed to the fibreglass cover via 4 studs. One of the lower studs was loose, and could not be tightened, while the other was missing.

I couldn't drill though the stainless grill with my cheap, DIY drill bits, so I drilled holes through the fibreglass, and used a combination of washers, nuts & bolts to clamp the grill to the case.


In addition, I drilled out the drain holes in the bottom of the case, creating three large (38mm) holes to ensure the boiler was getting plenty of air.

The gasket was in two pieces, with the original section stuck to the cover. So I carefully hung the section that boilerman had made to the exhaust tube, and then pushed the cover back on and replaced the hinge pins.

I fired up the boiler and hung around for a while. It seemed to be running fine, and continued to do so for the next few days.


The more I thought about the 3 large holes I'd drilled in the case, the more convinced I was that they were not part of the solution. After all, the boiler should work as designed, without breather holes.

So I taped over them with packaging tape to block them up, and then ran another test. Unfortunately this did affect performance. This is roughly what I get:-


It is clear from the Boulter Camray Installation & Service Manual that the exhaust seal and gasket are very important to the correct running of the boiler. 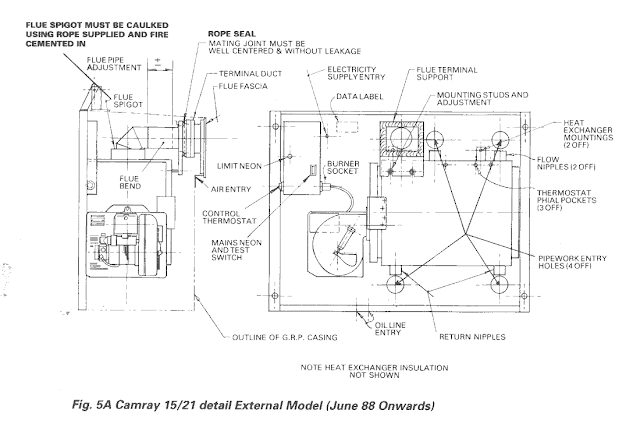 If we ever manage to track down a replacement gasket (they are not manufactured any more) I'll be sure to fit it and run the tests again!


It seems to me that you could have a similar problem if the boiler thermostat (the one checking the temperature of the water directly in the boiler) had low hysteresis. This would cause the boiler to start, trip the stat, go off, trip the stat the other way, and then restart. However, this sort of problem would not respond to cutting large holes in the boilers cover.
Posted by SteveDee at 11:46