I managed to finish off the 2015 bird box on Wednesday and attached it to an archway, just a few metres outside our back door.


Something triggered it around midday yesterday, but didn't stick around long enough to be captured on video.


I just have a small niggle where the system is taking 15-20 seconds to find the time file. But other than that, its all systems go! 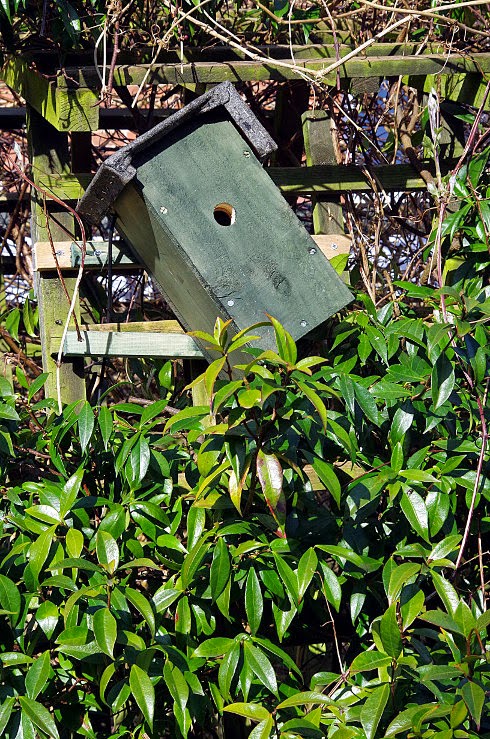 Let there be light!


I was impressed by the quality of NestBoxTech's video mostly due to the daylight flooding in from a box window. So I initially thought about making a light dome by using either a small plastic or glass bottle. However, I then remembered that HandyKam sell bits & pieces, so I jumped on the net and ordered 2 plastic windows for less than 3 quid.

As both my boxes are now tilted to one side, I have only fitted one window to each box, on the high side for maximum effect.

I made a bit of a hash of cutting the 50mm hole required for each window. My closest tank cutter was 51mm, and my battery powered Bosch seems to have a slightly buckled chuck.

I cut the first window hole in the 2014 box. The hole was within the viewing area of the camera, so I had to find a lens with a narrower angle of view in order to exclude the bright light from the image, as the camera auto-brightness was making the rest of the box too dark.

I was also in a hurry to stick the window in with Araldite and get the box back up. But now that the adhesive has set, I can probably remove the ugly staples and wire support.


Both the 2014 and 2015 systems get time from a file on my time server. Although the two systems have almost identical applications software, the new system fails to read the time file first time around, so I've modified my Gambas application to keep trying at 5 second intervals. It seems to take 15 - 20 seconds longer than the 2014 box.

So what's the difference between the two systems?

Well the 2015 box operating system is newer than the other box. Here are the two outputs from: uname -a

Something has changed in the OS which is creating this problem. However I've simply modified my code to attempt to read the time file again every 5 seconds until it reads the file.

This is not a huge problem, but I'd like to get to the bottom of it.


Blue tits have been visiting the 2014 box on most days, and some times they pop inside for a quick look around. This is the first video clip with the plastic window fitted. It was created by Motion running at 4 frames per second.

Sometimes the video starts out with a green colour-cast, but seems to correct itself after a few seconds.