A pair (or possibly more than one pair) of blue tits have been visiting our two Raspberry Pi bird boxes since early March.

They have a little daily routine which is likely to continue for another week, before they change gear, and start the business of nest building.

Both Pi powered systems seem to be working well, so I'll be ready when the real action kicks off.

Very soon after installing these two boxes, the blue tits started visiting. Initially the male (I think) would hang on the outside, triggering the box sensor as he looked inside.


But after about a week of this, the birds started to venture inside the boxes, and so a little routine developed.

Each day the pair tour the boxes in our garden, and probably the boxes in neighboring gardens. The first visit is typically just before 7am. First one box, then the other.

They may return two or three times during the morning (maybe 8ish, 9ish) and then not come back until around 3pm.

This video shows the birds visiting the inside of the 2015 box, followed by the 2014 box. In the 2014 box video, the male appears to enter first (to make sure its safe?) and then its partner comes in and the male leaves to go on guard duty outside the box.


This is only 4fps video created by 'motion' (hence the blur). Once the birds have established a nest I'll start using higher resolution and higher frame rates.

The video I see is much better quality than what you see uploaded to this blog. This is especially true if you view this video at full-screen.


I can't tell the difference between male & female blue tits, but it appears that the male just looks around inside the box, while the female keeps picking bits from the floor, which are then either swallowed, taken outside or simply dropped on the floor again.


At the moment it looks like our blue tits are spending longer visiting our 2014 box than our new box. I'd much prefer them to move into the new box, because of its location. The new box it just under 5m from our back door. This location has been used many times by blue tits, but it is too close to the house to attract any other species. 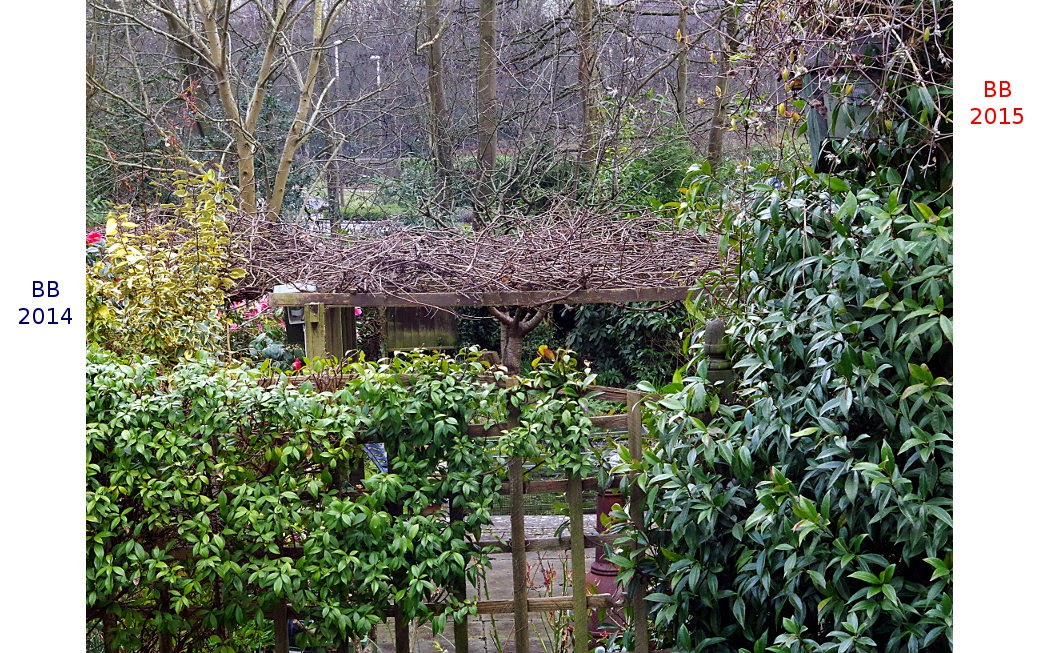 The 2014 box is about 6m further away, and this location has been used mostly by great tits. However, if the blue tits establish themselves in this box, the newer, closer box will remain empty, because blue tits won't tolerate such close blue tit neighbours. In fact they can make things unpleasant for neighbouring great tits, but these bigger birds tend to stand their ground, at least they do when they have good reason to.


Looking back at my 2014 posts, I see that the great tits arrived (i.e. entered the 2014 box for the first time) on the 25th March, and had a fully fitted nest by the 28th. So I'm hoping to see them appear in the next few days, and start building straight away. This would force the blue tits to take the closer (2015) box, or to go elsewhere.

We certainly have a lot more birds visiting our feeders this spring than we had last, when I think I described it as a 'buyers market'.

The gantt chart for 2014 shows how it all unfolded for last years great tits.


Having replaced my garage computer with a Raspberry Pi time server, it occurred to me yesterday that I could bring both the Pi server and the wifi router back into the house.

The main benefit of this is that I get a much stronger wifi signal between router and my laptop with the router located in our kitchen, rather than in the garage, while still getting a rock solid signal between router and each of the bird boxes. This may mean that I can stream video from each box at a higher resolution. My laptop is certainly more responsive when I remote into each of the Raspberry Pi bird boxes.

The idea is to use this along with my Raspberry PiB2 to display the video stream from each box. The 7" LCD will be temporarily mounted on the kitchen wall, and left running until the chicks leave the nest (assuming the birds play ball!).

Unfortunately this display has a long way to travel, so might not arrive much before the end of April.


Just a thought, but wondering if I could record video continuously at hiRes, and then stream through some kind of motion detection software.

For example, capture video using RaspiVid, stream to a server and record in (say) 10MB files. Run each file through software to detect motion and create a text file indicating time/date when detection occurred. Then I could use these timestamps to go back through the video files looking for action sequences.

This would mean not only higher quality video, but also the chance to include the video frames leading up to, and following the detected clip.
Posted by SteveDee at 14:46