We just bought one of these little wonders for a Canon 1100D. Great price, nice box, but no instructions.


OK, so it may not be the most difficult bit of tech, but I see others on the net searching for an instruction manual, so this may help someone.

According to the Yongnuo website, they seem to be having problems from another company claiming to be them, so maybe we have a fake.


This device was bought through Amazon from BV & Jo for less than £20. Its actually 2 devices: a transmitter and a receiver.

The receiver plugs into the shutter release via a short cable and a small jack plug, and sits on the camera hot-shoe.

To use the remote in delay mode, set the remote switch to the right (timer icon). Pressing the push-button will operate the shutter after a 3 to 4 second delay.

If the camera is also set to "B" ("Bulb" or "Brief" mode), then pressing the push button on the remote will hold the shutter open until it is released.

And finally, on the back of the 2 devices are a bank of 4 switches.


I think these must set the radio frequency. However, the legend "ALL" may indicate that the remote can fire a number of separate devices at the same time.

Mel asked me about the batteries (in the comments below);

The controller module requires a 3V Lithium CR2 which is NOT rechargeable. 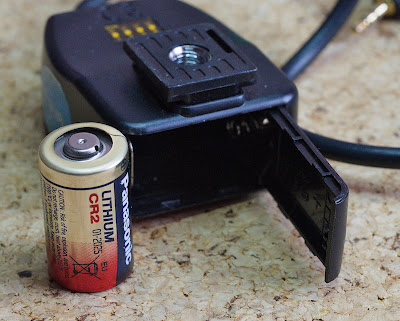 The remote has a 3V button cell, type 2032 which may be described as DL/CR/ECR 2032. This battery is often used in car-fobs, and is also non-rechargeable.

You also have to remove 4 tiny screws to get to it. 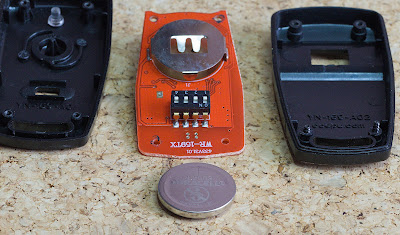