A Python tutorial on Colour Recognition recently grabbed my attention.

It looked like an interesting playground to step into, so...

...like any good Gambaser, I decided to write some code.

The article in question was actually centered around opencv and illustrated some techniques using the opencv API with Python. Any coloured area clicked by the mouse would be compared to a look-up table of colours in a CSV file.

After getting the Python code to run and having played around with it for a while, I wondered if I could replicate it with Gambas by using the opencv C API. Although I knew that support for the C API had been dropped some time ago, my understanding was that the code was still in the libraries.

However, after several hours of disappointment, I gave up and just started coding in Gambas without it.

In fact, none of the openvc stuff was required for this simple program. 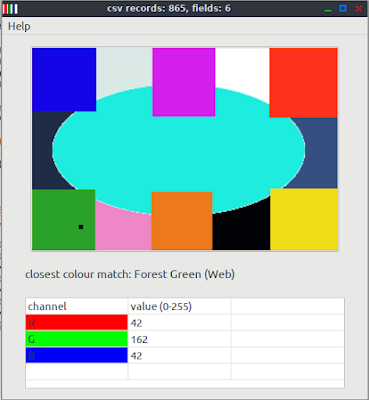 All my Gambas program did initially was to load a test image and allow the user to pick a pixel via the mouse while looking-up the nearest colour from a CSV file.

The biggest chunk of code just loads the CSV file into a collection and then compares the sum of the RGB channels with each of the 800+ colours detailed in the CSV file.

Someone on GitHub called codebrainz (Matthew Brush) had a lot of patience putting together the colour CSV file... 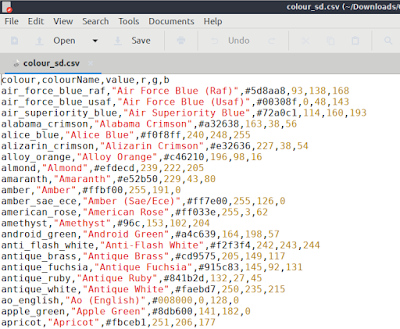 So my initial Gambas code doesn't do very much, but if you want to download the project, I've posted it over at GambasONE: https://forum.gambas.one/viewtopic.php?f=13&t=1028

an application for this madness

Just to set myself a real-life application challenge, I thought it might be interesting to make a program that could decode the colours used on electrical resistors to denote their value. The basic code looks like this:- 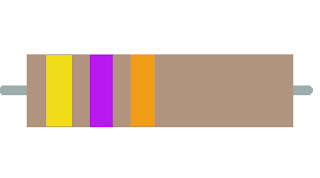 When viewed left-to-right, the first two colours are digits, while the third represents the number of zeroes.

The colour code roughly follows the colours of the rainbow:-

The next step is to take a slice through the centre of the resistor image and convert the colours to numbers. After that, I need to start working on real resistor images. This should happen in my next post.