I seem to change the way that I process photos every 18 months or so.


These changes may affect the choice of photo viewer, editor or even the format used to take photos.

Although my computer operates on Linux, both Gimp and RawTherapee are cross platform applications (e.g. Linux, OS-X and Windows) while Geeqie is for Unix based operating systems (Linux & OS-X). So much of the following is still relevant to Apple & Microsoft users.


A number of things have changed in the last few years which have changed the way that I take photos, and the way I edit and save the end result;

my camera of choice


Having disposed of my trusty Pentax K30 dSLR, I'm now in a relationship with my Olympus E-M10 micro four thirds camera. I bloody love it!

As my image editor now has much better support for RAWs, I've set this camera to save images only as RAWs. However, I frequently make use of the "ART" mode on this camera, which gives me a processed version of the photo in jpeg (e.g. monochrome, pin-hole effect, or whatever) in addition to the basic unadulterated RAW version. In such cases I may use the jpeg 'as-is' or edit the full (colour) RAW version.


RAW files are big and generally quite slow to load, but note that RAW files also contain a jpeg copy.


Photo viewers like Geeqie can access the jpeg image from the RAW file, which means they load & display the images much faster compared to opening and displaying the full RAW file. So Geeqie is my viewer of choice when I want to quickly review my photos and delete the duds (i.e. most of them).

You can generally load a RAW editor directly from Geeqie for the current file being viewed, although there have been some problems and this may be version dependent.

File conversion (and editing) with RawTherapee


The current version of RawTherapee (v5.7) handles both our Olympus and Panasonic RAW files. I could do all my editing in RawTherapee, however I prefer many of the tools in Gimp.

In RawTherapee I like to use the 'peak detectors' as an aid to setting the exposure, using both the Exposure compensation and Highlight compression controls.

I may also use the Straighten/Fine rotation tool if the horizon looks a bit wonky.


All you do is click on the tilt gizmo and then draw a line along the horizon, and the image automatically rotates to make it level...brilliant!

For some images I may use the Graduated Filter, as it has a nifty set of guides... 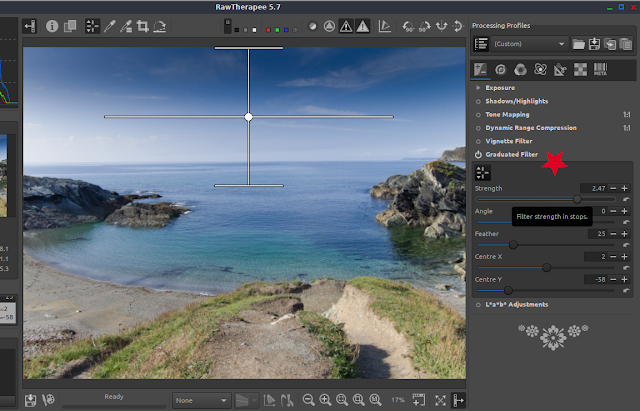 ...and then I increase the "Strength" slider for desired effect.

final image editing with The Gimp


With RawTherapee set up to use Gimp as the external editor, I just click on the 'paintbrush & pallet' icon. This converts the image to a 16bit TIFF and loads Gimp. Support for 16bit TIFF files was added to Gimp from v2.9 onwards (current version is 2.10.12). Pre-v2.9, Gimp was just an 8bit editor.

Gimp and RawTherapee work hand-in-hand, so you could open a RAW in Gimp and it will load the file in RawTherapee first, and convert to TIFF.

In order to get RawTherapee to load Gimp, you may need to follow the RawTherapee menu Preferences > General > External Editor and select GIMP. If this does not work (possibly because Gimp is not on your system path) select Custom command line and enter the full path to Gimp.


In Gimp I like to use "Levels" with histogram set to "Log" and (if necessary) reset the range for Value, Red, Green & Blue by moving markers to the edge of the log histogram to expand the dynamic range.


I also like playing with the new Shadows-Highlights tool in Gimp. 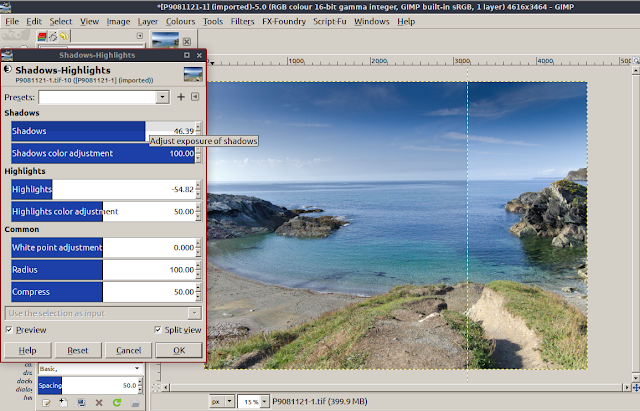 And after reducing the image size via menu Image > Scale Image... I may select menu Filters > Enhance > Sharpen (unsharp mask)... 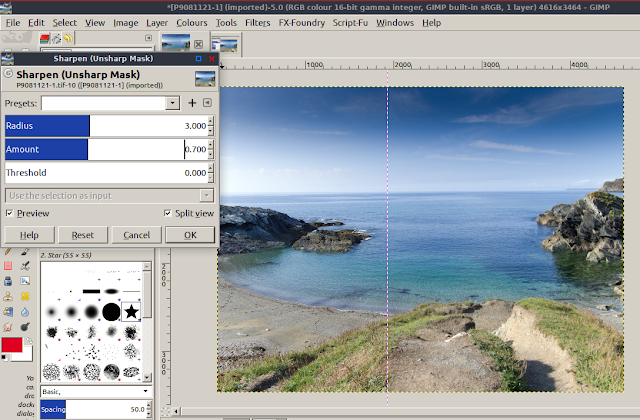 ...and then there are loads of things you can do with layers in Gimp, but that's another story.


The operations above describe my basic procedure for generally improving photos, but both RawTherapee and Gimp are capable of much more. In subsequent posts I hope to document more editing techniques.

Open RAW files take up quite a bit of system RAM. Each time you open a RAW in RawTherapee from Geeqie it loads a new instance of RawTherapee. So I suggest you close down any running instances of RawTherapee and/or Gimp that are no longer required.


The Gimp: replace that boring sky