Things were going well for our resident blue tits.


They had spent weeks checking out the nest box on our maple tree before building a nest and laying a few eggs.


Then the great tits rocked up!

The bird box in question was built about 6 or 7 years ago during a particularly active period for the nuthatch. I wondered whether we could tempt these interesting birds to nest, so I built a plywood box with a 32mm entrance hole.

This box started out with an analogue camera which was replaced by my first Pi camera system during the winter of 2013/14. It has never been used by a nuthatch, but each year it has been the home of either blue tits or great tits. I suspect its popularity is due in part to the hard nature of plywood. When the birds test the security of the entrance hole they find it difficult to pull off bits of wood. Whereas some of my other boxes (made from regular wood) are more easily damaged.

The blue tits arrived weeks ago, at the beginning of March. But it was a cold, damp and snowy March/April right up to about the 6th/7th April, before it started to warm up, so nest building was delayed. The female blue tit spent her first night in the box on 14th April, but the nest was no where near ready, and bare patches of floor were clearly visible.

However, by the night of the 14th the nest was complete, and the first egg may have been laid in the morning. All seemed to be going well until the 22nd. I'd noticed a lot of activity in the garden in the morning; I could see aerial dog fights but wasn't sure who was chasing who. And it was only when I was reviewing box time-lapse images that evening that I thought I'd caught a glimpse of a black head as the images rattled past at high speed. 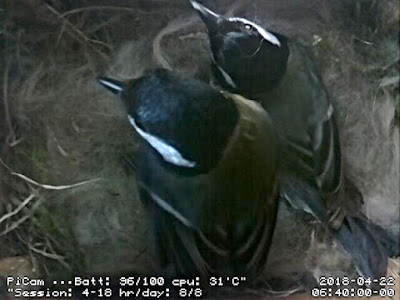 Sure enough, there were images of a great tit sitting on the nest where I was expecting a blue headed tit, and at one point both great tits were checking out the box. The great tits only occupied the nest for a short time, and for the rest of the day (and the following day) the blue tit was back in place.

But 2 days later, on the morning of the 24th, a great tit came back into the nest after the blue tit had stepped outside at about 6:45am. After about 30 minutes the great tit left and the female blue tit returned.

It really kicked off when the great tit came back a few minutes later. Blue tits have no chance against the larger great tits when they are trapped in a confined space. The low frame rate produced by "Motion" (the program running at the time) doesn't show much more than a blur of feathers, but I managed to recover one useful frame... 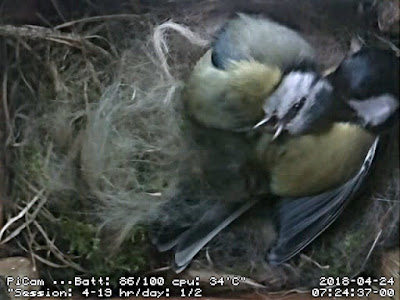 ...the great tit has the blue tit by the neck!

The takeover strategy appeared to be one of simple occupation by the female great tit, with the male great tit staying well out of the way. The female spent most of the morning just sitting on the blue tit eggs. She left the box from time to time for short breaks, but there was no way that the blue tits were going to enter the box and risk getting trapped. Instead, they just paced up and down the branches right outside the box.

On one occasion I saw the female great tit come out of the box and chase the blue tits away. After 4 hours of this uneasy stand-off, the blue tits had to admit defeat and move away. And I noticed the male checking out a neighbouring box during the afternoon. The female great tit was out of the nest for most of the afternoon, but returned to quickly check the box every 20 or 30 minutes. By this time the male great tit had started to patrol the garden and chase away any other great tits that tried to visit the bird feeders.


I was surprised that the great tits did not destroy the blue tits eggs as soon as they moved in. In fact having done a bit more reading, it seems that these eggs will probably be looked after along with the great tits own eggs. So we have the possible prospect of a mixed species nest, where the parents attempt to raise great tits and blue tits ....Fantastic!

Although I've only had a clear view of 6 blue tit eggs, I have reason to think that there may be 7 or 8. Although the great tit female has stayed in the nest for the last 2 nights, it does not look like she has laid any eggs of her own so far. If she does lay (say) half a dozen, the parents are going to be very busy trying to find food for all of them!

As for the blue tit pair, they are now working flat out building a nest inside my neighbours bird box. 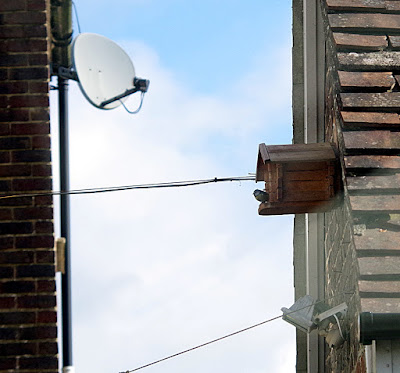 Although they seem to have moved on, as I write this I've just seen the female blue tit take a terrible risk. She went down to her original nest and after a few moments of hesitation, she went inside, had a quick look around and then left.

It makes me wonder whether she will try to feed any chicks that hatch in this nest. It is not uncommon for adults to feed chicks that are not theirs, and (I gather) for the parents to tolerate this.

The next 6 or 7 weeks are going to be veeeery interesting!

The moral of this story is that these birds should have read my blog. I currently have 3 bird boxes in our garden with different entrance hole sizes; 25mm for blue/coal tits, 28mm for great tits, and 32mm for nuthatch. Its that simple.