Although we have had some very bright, sunny days during February, it has also often been very cold.


And it looks like we have some seriously cold days to come during early March.


However, there are still some signs that our garden birds are thinking about nest building...

...and I have even seen a pair of long tailed tits collecting cobweb and carrying it into a tree, so I guess they may have already started.

Back at the beginning of 2009 I volunteered for redundancy, which suddenly gave me much more time for 'projects'. One of my first was to fit a simple camera into a bird box. I was soon hooked, and each year since then I've tried to improve my systems.

But not this year. I left the maple tree bird box screwed to the tree last year on the basis that (if it survived the winter) I'd do the minimum to get the system running. So for 2018, we just have one tit box camera, an open fronted robin box with 2 old cameras, a new trail camera, and my Bat Call Detector/Logger.


This camera system is the one I developed during the winter of 2013/14 using a Raspberry Pi with timed power control via a 555 timer and mosfet. The box is fitted about 3m up a Canadian Maple tree, and it has a 32mm entrance hole. This combination of height and hole size is not supposed to suit blue tits, but I'm sure there will be the usual competition between blue tits and great tits for this prime site. (I'm still hoping to see the tits evicted by a pair of nuthatch nest builders, but I guess my chances are slim). I say 'prime site' because this is about the only box site that we have used in our garden in recent years that has not been investigated by curious cats.

This camera system is powered by a 12V 12Ahr lead acid battery hidden on the ground, under a flower pot. Communication is via wifi, so in order to support this box I also have a dedicated router/network, a time server (as there is no RTC in the box) and a laptop to monitor activity, transfer files, & so on.

I only re-connected the battery and set the system up mid-February after noticing activity on the outside of the box.


Since then, a male blue tit has been visiting several times a day, every day. For a few days he even invited a female in for a viewing and some light housework, but she seems to have since disappeared.


For two consecutive seasons we had robins nesting in a box hidden in among ivy about 3' off the ground. Most years we get birds and/or mice checking it out, but robins have not used it for nesting for a few years. In any case the video from the cameras can only be viewed via an old TV in the garage.


I was recently given a Browning Strike Force HD Pro trail camera. I'm really impressed. Although I like the Pi + RaspiCam combination, it can't compete with a proper trail cam when it comes to battery powered operation.

This model cost £149 from NatureSpy and has a toothed metal clamp which works well when clamped to a tree trunk, as it tends to bite into the bark. However, its not so good on smooth, plained wood or flat faced fence posts, hence my slightly strange fixing method.


Browning have given the enclosure a rather strange camouflage paint job, which I guess only really works when attached to the right kind/colour of tree. But it takes good photos, and its very sensitive to small creatures, while not creating lots of falsely triggered pictures.


Lens flare can be a problem, so the unit probably needs to face north, at least at this time of the year. 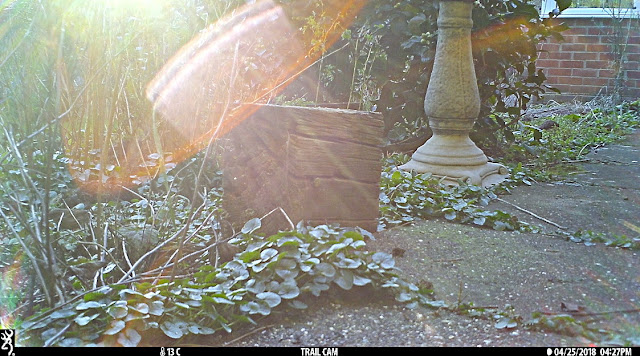 This little area (which is under 4 hanging feeders) is covered by an ultrasonic cat scarer. This black cat always jumps out of his skin when he triggers it. 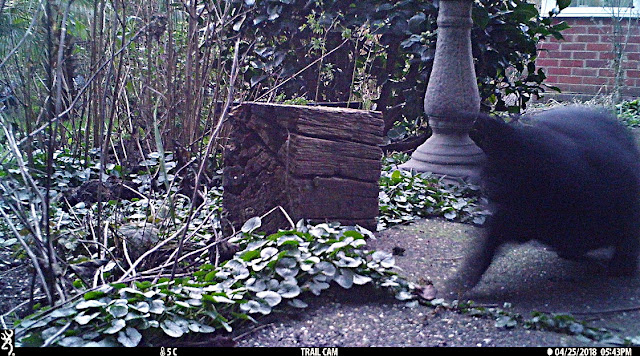 ...whereas this guy is either deaf or well 'ard... 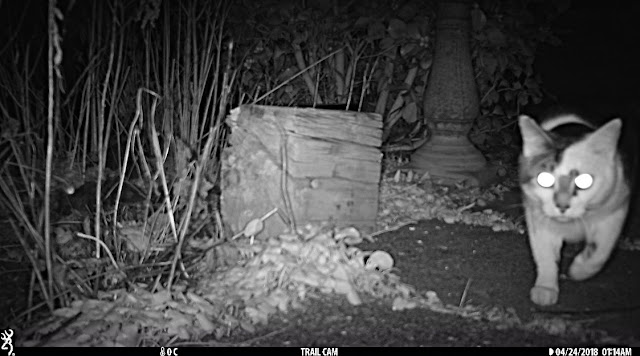 
I'll have to wait a few more weeks for the weather to improve before the local bats take to the air once again. But I expect this activity to soak up much of my free [project] time, at least during the spring. I hope that by making full spectrum recordings, it will be easier to interpret the results and maybe determine one bat species from another!

I also wonder what my chances are of capturing a bat photo using my trail camera fixed to a pole, maybe 3m above the ground!
Posted by SteveDee at 16:51