It is over 70 years since the end of World War 2, so few of the men & women that served in this conflict are still with us.


Even if you didn't get around to talking about WW2 with your parents or grandparents when they were still alive, it may not be too late to gain a better insight by doing a bit of research.


However, the sooner you get started, the better.

History takes on another dimension when you have a personal connection with those that lived through the period. My father didn't talk to us about his wartime experiences when we were children. And I guess by the time we had grown up we were too busy with our own lives and our own children to take the time to ask.


My comments relate primarily to British men serving in the war, but may also be applicable to women that joined one of the services.

If you have living relatives that lived through WW2 then there is no time to waste. Anyone that was old enough to 'sign-up' for service at the start of the war in 1939 will now be over 95. But any of their surviving younger brothers, sisters or cousins may still be able to help with information (e.g. what they did, where they were posted, or maybe they still have wartime letters or photographs).

Either you, or a family member, may have an old cardboard box in the loft containing photos, letters, medals and maybe the odd souvenir or 'keepsake'. Some items may seem irrelevant, but it can be surprising how a little bit of detective work can reveal their relevance. Photos with messages or dates on the back are particularly important, and can sometimes be used to date other unmarked photos (e.g. maybe with similar backgrounds, similar clothes & so on).

You probably need to determine your relative's service record in order to 'flesh-out' their personal war history. For example, you may know that they finished the war in a certain regiment at a certain rank, but what was their progression to that point? Did they enlist and join Regiment x before being transferred to Regiment y before ending up in Regiment z?


The reason that this is important is that there are personal accounts by others on the internet, others that may have worked alongside your relative. And their personal recollections may help you understand how and what your relative experienced, and maybe how they felt about what was going on around them.

There are several internet sites where you can purchase your relative's war service record. While I have scanned through a couple of these, I've yet to purchase any information. I can't see how you determine that you are buying the correct records, before you part with your money. If you have your relatives service ID and this is listed against the correct name, then I guess it's fine. But my dad's service ID is not listed (at least on the sites I've looked at) so I've yet to hand over any cash!

Wikipedia is a great source of information on subjects relating to WW2; e.g. Allied Landings, Army Regiments and there movements in wartime. However, this information is only useful if it contains references that you can follow up and verify. Some of the Wikipedia information relating to my dad's regiment is wrong, so do some careful checking.

Also note that if a second source appears to be a partial duplicate of another site, then it doesn't count!

However, I have found two internet resources to be particularly useful:-


The People's War was a project that only ran for two and a half years, from mid 2003 until the start of 2006. But in that time it amassed 47,000 personal accounts and 15,000 images. This data is now available from the archive. (I don't understand why they closed it to new content).

The Imperial War Museum not only have personal written accounts, but also spoken histories, photos, and video.

Books relating to the war can also be useful, especially in giving you a better idea why your relative was sent overseas and what the master plan (if any) was. Some particularly useful books were written by people that served in the war, and so they may now be difficult or expensive to buy. This is where your local Library can be especially useful.

Apart from a visit to the WW2 section of your local Library, you can also check the availability of a particular book using the internet. For example, for West Sussex use this link: https://www.westsussex.gov.uk/libraries/

I was quite lucky with may dad's history. Although he didn't really talk to us about the war, he did attend annual reunions at Whipps Cross (The Eagle & Gun Regimental Association). There was one trivial looking piece of paper among dad's stuff; 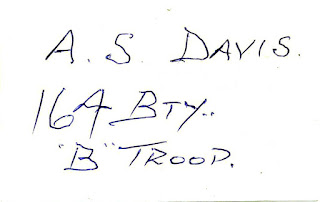 I worked out that dad had written this on a piece of paper and used it as an ID badge for maybe his last reunion in 1996. I already knew that dad had been in 164 Battery of the 59th Regiment. But this make-shift ID badge narrowed it down further by showing he was in Troop "B" (one of 6 Troops). There would have been 30-40 Gunners operating 4 guns in this troop, so this was a great help to me.

Although I realise that my dad's history is only of any real interest to me and others in my family, there is a chance that other people with relatives who served in the 59th Regiment (the Essex Regiment) Royal Artillery, HAA may be looking for information about their own relatives wartime experiences.

So with that in mind, I have now created a site containing my research: https://sergeant-ack-ack.blogspot.co.uk/