Ethereum: what do you need to know?

How much do you need to understand about Ether and the BlockChain?


There is a mountain of information out there on virtual currency and the BlockChain, but it seems to me that the vast majority is aimed at the initiated.


In other words it is mostly written at a level that assumes you already understand the jargon and have a good understanding of the basics.

In my earlier posts (here and here) I attempted to provide a simple introduction for those of us that have no idea what its all about.

I think I demonstrated that by spending a modest amount (maybe as little as £1) you can play with ether, learn something about the subject, and maybe have a little fun too!

And my sketch in an earlier post showing access to the BlockChain via the EVM may not be detailed (or even accurate), but I hope it helps to visualise the process.

There is often a big difference between what you need to know, and what you would like to know about a subject. The best analogy I can think of is the motor car.

I understand that there are over 1billion cars in the world, so I guess there are a similar number of people that know how to drive a car. But the number of drivers that actually fully understand how a car works is just a very small minority.

So what is the minimum you need to know about ether and other decentralised virtual currencies?


Blockchain technology and cryptocurrencies like Bitcoin and Ether are very new, so no one can be sure if this is a phase or stage of development that could be swept away by something better.

Basically, if you lose your access keys (Public and Private) you cannot access your money, and nor can anyone else.


These currencies are not controlled by banks or governments. You don't have Ether bank accounts that are administered by a bank, so no one is responsible for your investment, and no one can help you if you lose the vital "keys" required to monitor and control your assets.

At any point in the future, your ether could be worth a fortune or absolutely nothing.


These currencies are not referenced to, or backed by anything (such as gold). If confidence in the currency is high, market price (value) may rise. If confidence is low, then the value my fall.

Another fun way to lose everything!


It all comes down to open source software. You are at the mercy of a lot of free code and whatever potential there may be for software errors, and whatever scope there is for malicious hacking. In the case of ether, this applies not only to the Blockchain (remember, this is a kind of ledger) but also to any software used to access your assets.

How do I assess the risks?


...I don't know. Read all you can on the subject, and only invest what you are prepared to lose!

Is anyone taking this seriously?


Yes, large financial organisations around the world are investing in research & development to determine ways to utilise this technology and bring new products/services to market.


Many traditional currencies use special names for fractional parts (e.g. pence, cents & so on). For ether, the range of values and the names used to describe fractions and multipliers is mind-blowing;

There are also special names for large quantities of ether, which I wont list here. As a beginner, you probably don't need to memorise all these units, just be aware that they exist!


Although there are no banks, it turns out that there are costs involved in buying and dealing with ether. Naturally there will be charges when you buy ether from a currency exchange. 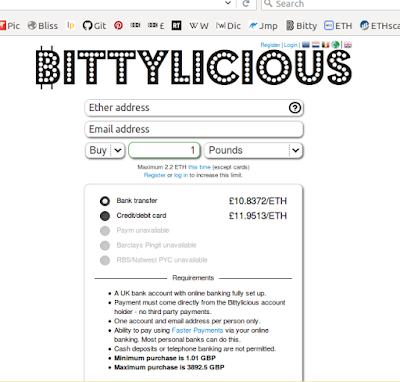 ...so it would cost about 71p/ETH to buy ether via Bittylicious.

If you want to make a transaction, such as paying someone in ether or just moving ether between one of your wallets and another, you have to pay for gas.

Wow! What the hell has Gas got to do with it?


Well, remember that there are machines (computers) that are running all the time "mining" ether, and updating the blockchain. Computer hardware cost money and so does the electricity to run them. So "gas" is just a term used to describe fees used to support the system and pay for computer time.

The amount you pay for a transaction depends upon the complexity of the task (e.g. how much computing time/power the transaction requires). The fees involved are controlled by computer algorithms, so there isn't a simple answer in terms of the actual amounts involved.

As a beginner, I wouldn't get too concerned about gas fees at this stage. But if you feel the need to understand this better, start here.

What else do I need to know?


Hopefully this post builds on the previous 2 posts by providing basic, low level information for beginners who may want to "dabble" and gain just a small incite into the subject. Clearly if your aim is to become a trader, you will need to arm yourself with a lot more detailed information, which you should be able to find elsewhere.

In my next ethereum post I'll take a closer look at Wallets.
Posted by SteveDee at 10:57