I now have a Raspberry Pi 3 in addition to my other 10 Pi boards.


This is my first Pi 3 and it does appear to be even quicker than my Pi 2.


But is it fast enough to be used as the basis for a Linux desktop computer?


It was a welcome surprise to most people that the Foundation released yet another Pi model at the end of February, on the 4th anniversary of the launch of the original Pi model B.

And it looks like the A+ is due to benefit from some of the upgrades included in the Pi 3, although we may have to wait another 3 or 4 months for this to materialise.


Well the foot-print and the layout is the same as the recent Pi B+ and Pi 2 boards, and unfortunately they have stuck with the same size fixing holes. As the M3 threaded component (e.g. nut, screw, nylon pillar & so on) is about the most widely available size in the [metric] world, I would have preferred the holes to have been enlarged to 3.5mm. (Oh well! I'll just have to keep drilling them out myself using my vero-cutter).


One other point I did not like on earlier Pi boards which use the microSD card, is the positioning of the card carrier. I frequently grab the board to plug in a USB device only to find that I have accidentally released the SD card from the pump-action carrier.

I always thought the solution would have been to move the carrier in-board, so the SD card would naturally sit flush to the end of the board. However, on the Pi 3 they have left the carrier in the same place, but just fitted a friction carrier instead of the pump-action type on earlier boards.

Most of the other specification details are widely covered elsewhere on the net (e.g. faster/better cpu and gpu, but same amount of RAM).

One feature that stands out is the inclusion of wireless. Having fully integrated WiFi means I could save approximately £10 on any Pi application that needs WiFi. However, initial testing appears to show that results with an Edimax EW-7811Un USB wifi adapter (my dongle of choice) are better than the on-board interface.

A quick check using the command: iwconfig while using ifup/ifdown to switch between the 2 wifi interfaces, gave me a better Link Quality and Rate for the Edimax (54Mbps against 48Mbps)  ...this will need further investigation.

Power consumption is reported to be slightly higher, but I wonder how the Pi 3 compares to a Pi 2 + USB WiFi dongle?  (I may have to check this myself).


I don't really have an immediate [project] use for a Pi 3 but I do have a sort of Pi desktop that I had been running with a Pi 2, which has now been substituted with the Pi 3.

Clearly the Pi 3 is noticeably nippier when running many of the usual applications, and here are a few of the things I now do on this little "DesktopPi" machine.


It's pretty good running Epiphany, but as I prefer Firefox I have installed its little twin Iceweasle. YouTube & TED Talks seem fine, however I can't do anything that needs Flash (like running BBC news videos) but maybe that will become less of a problem in the future, if/when they drop Flash.


No problems, except I need to add an amplifier and a speaker or two.


Up until recently I've done most Pi programming (especially Gambas projects) on my laptop, and then moved the project over to a Pi for testing, debugging and final editing. But the Pi 3 runs the Gambas IDE very well and of course it has the standard Pi gpio. So its much better just to use my Pi 3 desktop computer! I also have a dedicated Gambas memory stick, so its easy to transfer projects, and keep them up to date.

I do some (but not much) Python programming for Pi, and once again this is best done on a real Pi rather than a laptop.

I can also program and upload Picaxe code via a Pi.


LibreCAD works great! And since my DesktopPi has a larger screen and a more stable mousepad than my laptop, I'll certainly be using this in the future.

Image editing with The Gimp


Yep, it works. But it seems quite slow to me, especially when applying filters such as Unsharp Mask. It clearly needs a lot more RAM. However, as mentioned in LibreCAD above, the larger screen and more stable mousepad will ensure I give it a fair try.

Although I haven't made much use of LibreOffice on the Pi, both the word processor and spreadsheet applications seem to work well.


Although I love the flexibility of my light-weight ASUS laptop, having a small fixed desktop computer on the desk in my tight-for-space "Man Cave" has certain benefits. 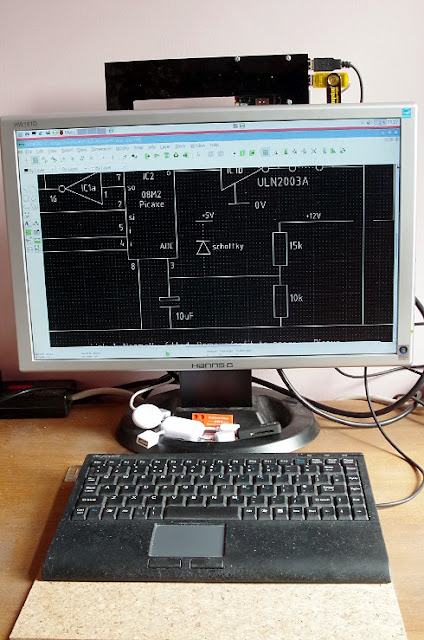 When I'm building something and want to view a circuit diagram or other documentation, I can do so on my DesktopPi while taking up less desk space than my laptop. 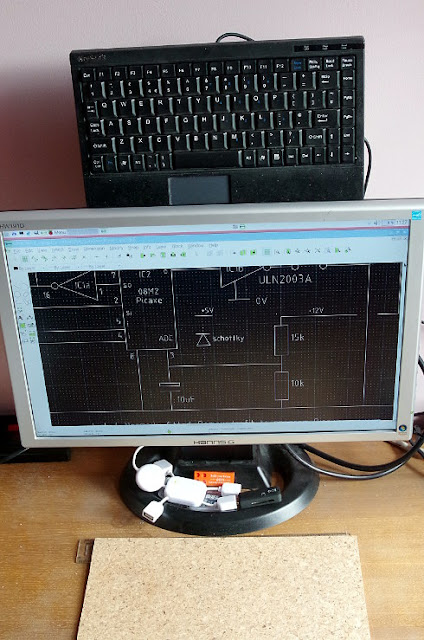 And always having a Pi that I can switch on at a moments notice, is sure to be preferable than having to find and hook together a board, power supply, screen and keyboard.
Posted by SteveDee at 11:48