We are so fortunate to be able to enjoy a garden with such a variety of wildlife.


But with the current surge in local house building, more people and busier roads, I wonder what it will be like in years to come.


What will future generations find crawling around their back yard?

Hey! Get out of my shed


Last weekend I discovered our robin chicks had moved out of their cramped, and probably rather smelly nest box. But they hadn't gone far. I carefully opened the shed door and stood in the doorway for a few seconds to allow my eyes to adjust to the relative darkness.

I saw two chicks perched around the ledge just below the roof, so I closed the door and left them in peace. A few days before, I'd been in to connect the battery to PiCam and had noticed a lot of fresh droppings on the bench and floor, indicating they had already been exploring the sheds interior.

But now there was no point in switching on PiCam as most of the action would be outside its field of vision. However, we could at least stand outside the shed and peer in through the grubby windows without creating too much distress.


This is the robins second brood of chicks raised in our shed this year (a total of 8 chicks) and we assume they must have started this season in another nest somewhere in the garden. Is it too late for a forth attempt?

There is a clear benefit for the robins to use our shed. They are safe from predators. The disadvantages include the likelihood of being spooked by people entering the shed. I think the last chicks left the shed before they were ready, simply because I needed the wheelbarrow!

The other disadvantage is the mavi. We are ankle deep in the stuff!

My Bit of the Planet


We were sitting by the pond late Saturday afternoon, drinking Greene King IPA, when I noticed a leaf on the ground twitch. On closer examination I found the culprit was a tiny frog, about as tiny as a frog can be without still being a tadpole.

As it slipped deeper into the foliage, we parted the plants with our hands causing a second frog to leap out. We also uncovered a newt laying quietly in a damp patch beside a rock. 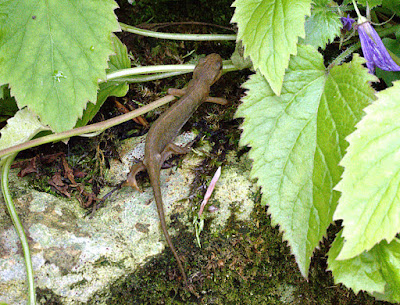 This is my favourite patch of the garden. It is probably less than 5m wide and runs about 15m down to a brook just beyond our fence line. The brook drains water from a Weald woodland, carrying it into a stretch of local river a few miles away. Our bit of the brook always holds some water, but doesn't flow much during the summer. During the winter it can flood its banks and link up with our pond.

We took the decision a few years ago to let the grass grow in the gap between the pond and the brook. So now it is covered with grass, weeds, bushes and a couple of trees. This has created a sort of wild-life corridor for amphibians, snakes and other critters.


Its a shame about the pond cover, which I made for the safety of our grand children. At least this has stopped the loss of fish and frogs by the healthy local heron population. However, the girls do get a chance to get very close to pond skaters, water boatmen and other mini-beasts, plus a variety of larger animals including frogs and the occasional newt.


When I was five or six years old (back in the late 1950s) I remember sitting on the step outside our back door watching lizards running around at our home in Essex. Sometimes I'd be quick enough to catch one. Sometimes I'd be left holding a tail, as the rest of the lizard made its escape into the long grass.

We had chickens and rabbits, fruit trees and ditches that seemed to hold water all year round. My dad used to get eaten alive by the gnats that started life in these wet trenches, whenever he ventured out to work in the garden.

But within a few years our road, and the road linking it to the A13, was "made-up" (i.e. turned from a muddy lane with brambles and buddleia, into a proper car carrying concrete strip). The horses were moved out of the field across the road, the old houses with large gardens, orchards and stables were replaced by new houses, ...lots of them.

So by the time I was 12 years old, these back-yard lizards had virtually disappeared. Driven to the point of extinction by cats, concrete and smaller, tidier gardens, with short-cut lawns, a lack of trees, and no piles of rotting firewood.

Our pond still attracted frogs and newts, and you might still find a slow worm in an over-grown corner of the garden, if you knew where to look. But what a dramatic transformation in such a short time-frame!

They say we are in the grip of our 6th mass extinction. Well that's where it all started ...Essex!


Back in 2015, sitting beside my Sussex pond, I got thinking about how my surroundings may have looked 100 years ago.

In 1915, Britain was in the middle of the First World War. Although our house is old, back then it would be another 18 years before 2 semi-detached houses would be built on this bit of rough ground, most likely populated by long grass, brambles and assorted bushes.

The busy "A" road would have been a track used mostly by horse & cart. Just a hundred yards from where I'm sitting was a Blacksmith, and we have certainly found a few of his horse shoes while digging the garden.

My neighbours brick built 'garage' would still have been used for its original purpose; as the wash house for the small number of pre-1900's Victorian houses built only 20 years earlier.


When did the dreadful noise from what is now a major road start to offend? Any motor vehicles passing by in 1915 would surely have been a novelty.

It is so difficult to see into the future. The government need to build lots more houses, and the popular plan is to build on brown-field sites. Around Horsham this means you take a green field and cut down all the trees, then grub-up the grass and hedgerow.

Now you have a brown field site, so you can build as many houses as you like and squash them in as close as you like. Concrete with a dash of close-cut lawn.

100 hundred years is shorter than it use to be


When you are young, 50 years seems like an unimaginable length of time. But as you get older, you realise that life is way too short. Your personal perception of time in non-linear. As a child, Christmas takes forever to arrive. As an adult they seem to come around every couple of months.

I understand that girls born about now in England have a 1 in 3 chance of living 100 years. Maybe one of our 3 grand daughters will pass by this way in 2115 and wonder what happened to the funny garden with a pond. 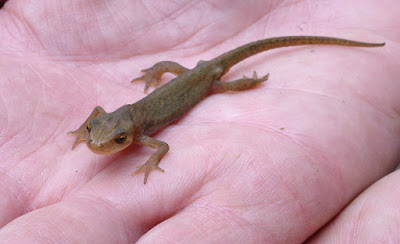 The garden where they played as children, collecting worms in a small bucket, watching butterflies and dragon flies, taking samples of pond water in the hope of finding mini-beasts, and holding newts in their warm little hands.
Posted by SteveDee at 17:42