The clock is ticking, but things are coming together nicely, if a little slowly.


Our garden is alive with birds at the moment, with mixed groups of finches, common tits (blue, coal & great), and the usual favourites including blackbird, thrush and a pair of robins.


To be honest, once we switched one of our feeders from mixed bird seed to sun flower hearts, we have seen quite an increase in bird traffic.

Just about all our regulars seem to prefer them to seed, and there seems to be less waste.


Spurred on by NestBoxTech's post last Wednesday, which shows early interest in his specially designed sloping tit box (no really, it is supposed to look like that!), on Friday I decided to put my 2014 box back together, and get it out there!


The roof on this box is still a dreadful bodge, but I did add an extra membrane to keep the electronics dry.

The ceiling around the l.e.d./camera plate also needed a coat of quick drying Dulux before I screwed it back on the pergola. I walked back to the house, took my coat off, and turned around to see a blue tit hanging on the outside of the box. It doesn't get any better than that!

There has been a lot of interest over the last few days, with the system triggered mainly by birds hanging on the outside and pecking around the hole. During Sunday and Monday I captured my first video of 2015 of a blue tit inspecting the box from the inside.

But as this box has a relatively large entrance hole (32mm) I'm hoping it will be used by a great tit. (Actually I'm hoping for a nuthatch, but it aint gonna happen....the box is in the wrong place).


Once again I'm using a simple Gambas program with eSpeak to alert us that the system has been triggered. The monitor basically pings the box IP address, and if it gets a positive response, a nice (if slightly robotic) lady called Monica announces "bird box, on".

This system only runs if we are at home. But it is loud enough to draw us to the back of the house to see who is checking out the box. It will only be used until April. Once nest building has started, we just watch the video stream (...when we have the time!).

The Robins are coming


We have also seen a male robin taking a peek at our robin box, hidden behind a curtain of ivy.

The good news is that this box has 2 line-scan cameras and audio.

The bad news is that I don't have a way of digitising/capturing the video at the moment. The best I can do is take a peek using an old portable tv located in our garage.


I've replaced the prototype camera/led board with a larger square of perforated board.

This has been given two coats of white paint which I hope will provide enough light from the three 10mm leds without blinding the occupants. 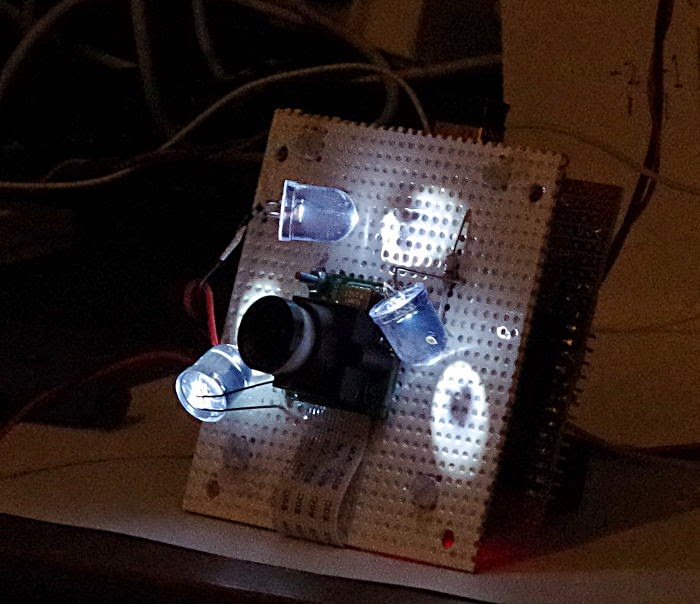 The plan now is to build a new wooden bird box, about 300mm high, to house this Raspberry cube.


Once again this year we have a couple of less common visitors.

Two or three times a day we notice individual branches on an evergreen climber shake as a tiny gold crest makes its way up the shrub, apparently checking out each limb for small insects.

And we often hear a very dull, boring bird singing like an angel. I think it is either a garden warbler or a white throat.
Posted by SteveDee at 21:35