I bought my first Raspberry Pi mid-2012 with the idea of using it with a bird box camera.

Unfortunately there were problems with the EzCap video capture module driver, and I have still not been able to get this going.


However, now armed with a PiCam I'm hoping for better luck with my new project.

Although I've got a number of analogue cameras, these have to be connected through some kind of video capture device (like the EzCap) if you want to use them with a computer. But the new Rapsberry Pi camera is connected directly to the Raspberry Pi (RPi) and produces high resolution video. The downside is that the RPi has to be fairly close to the camera.

So the idea is to have the PiCam and the RPi in, or close to, the bird box. The system can then transmit video via WiFi and run from batteries.

This raises a number of issues, but I've been thinking about potential problems and doing one or two tests over the last 4 weeks. I don't think any of these issues are show-stoppers, so its time to get on and do it....hopefully in good time for the start of the 2014 nest box season!

The plan is to get a workable system ready to install on the side of our garden arch-way by early February 2014.

I may need to make changes or compromises along the way, but here is V1 of my plan.

The RPi+PiCam will probably just stream video (via a wireless router) to an old Lubuntu (Linux) powered computer in the garage. This will run Ken Lavrsen's "motion" application and act as a server, storing video clips for later viewing. 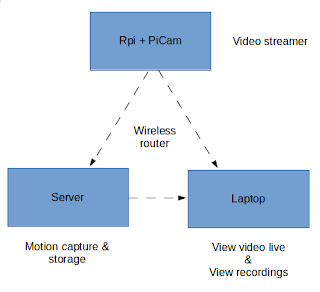 The RPi video stream will also be viewable live via other devices such as a laptop or Android phone. The server will also be wired to at least one existing analogue camera via an EzCap module. 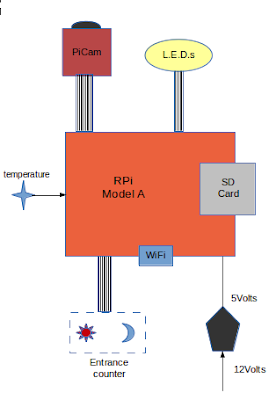 As the RPi is to be battery powered, I may as well use a Model A board. This should save 200mA compared to a Model B.

Although there is now an iRed version of the camera (i.e. the iR filter has been removed on the PiNoir camera) I plan to use the daylight version, as I want to get reasonable quality colour video. But one thing that will need changing is the lens. In order to get a full view of the nest I will need a 90deg angle of view (probably a 3.6mm lens).

There won't be enough natural daylight in the box for PiCam, so I need to supplement this with a few LEDs. This has to be done with care and sensitivity.

During the night the lights must be turned off, and during the daytime the lights should not shine into the eyes of the occupants. In the first case the LEDs will be controlled via outputs on the RPI. (In any case the battery will probably be removed for changing over night).

Where I've used LEDs in the past I have avoided glare by painting the inside of the roof white, and pointing the LEDs upwards.

This is something I'm already using. Its a simple light-beam circuit including an LED and photo-transistor. I record the number of times the beam is broken to deduce the level of activity.

I've measured bird box temperature before using a thermister. To be honest, I wouldn't bother to do this again if I had to worry about including some kind of analogue/digital converter. But the RPi can use a 1-wire sensor, so I thought this would be a good excuse to try one out.

It also occurred to me this morning (while in the shower) that the temperature in the bird box I plan to use, has risen above 35deg C in previous years. So maybe the sensor should be monitoring the RPi, rather than the birds.

I still have not decided whether to store captured video clips on the SD card, or just to leave that to the Lubuntu box. This is probably the only decision that will affect SD card choice, at least in terms of capacity.

I'll be using my existing Edimax EW-7811UN which is an n compatible device (up to 150Mbps). I may need to swap out the old Netgear (g) router in the garage for an n type if speed/bandwidth is a problem.

I'm thinking of buying a dirt-cheap car (cigar lighter) power unit and cracking it open with a hammer. I can solder on a couple of leads + crocodile clips for the 12V battery connections (probably cheaper and less hassle than making one).

I recently acquired a 12V 4Ahr battery so will start with this.

So in the next few weeks I will be adding more posts on this project.

Use the search function at the bottom of this page to find related posts. Just type in the search word: BirdBoxPiCam2014