We recently invited a guy into our organisation to conduct basic training on our MakerBot Replicator 3D printer for a bunch of department heads and other interested staff.

He also gave our machine a bit of a tune-up which has considerably improved print quality.

Its been a few months since I last had a chance to use this 3D printer, so I took the opportunity to work with the RoboSavvy trainer while setting up the equipment for the training session.

The first step was a physical inspection of the machine, which quickly revealed that many of the Replicator body screws were loose, and one was even missing its retaining nut!

The vertical bars, which allow vertical movement of the platform, had a lot of free play, and this was soon rectified.

The belt drive tension was increased by moving the motor on its mount, and the platform re-aligned.

Clearly there is a need for simple preventative maintenance, which should include a monthly or quarterly check on nuts, bolts & screws. But as the MakerBot case is constructed from plywood, I was advised not to over-tighten any screws or apply thread-lock.


Now previously I'd set the platform so I could just pass a sheet of printer paper between platform and nozzles. However, this guy set the gap much smaller, and explained that the spaghetti effect I was seeing at the base of my models was normally caused by too large a gap.

Next step was to upgrade the Replicator firmware from 5.5 to 7.2. Previously the machine code files had a .s3g extension, but from version 7 onwards .x3g files are required.

The software I'd previously used to create machine code files from .stl files was ReplicatorG, but MakerWare is now recommended, which certainly seems to install and run easier on our Windows 7 computers. It also has 3 simple quality profiles: low, medium and high. These profiles set the number of slices through the model, and obviously affect the time taken to print.

Here are a few photos to show the end result. The white tree frog was printed from a medium quality file, while the black frog is high quality. 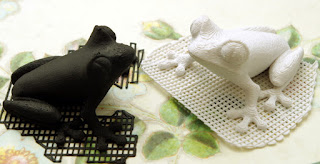 The medium quality white frog is certainly better than my previous attempts, while the high quality black frog has a much finer body pattern.