When you make the transition from "point and shoot" to SLR photography, there is one very important subject you really need to get to grips with:-

Using an SLR camera in "manual mode" puts you in total control, not only of composition and focus, but also exposure.


When you take a photo, you allow light into your camera. Assuming you are using a "digital" camera, the light reaches a "photo-sensitive sensor" which produces an electrical output, and ultimately this is processed into a picture. If this picture is correctly "exposed" it will not be too dark or too light.

"So what's the problem..." I hear you say,  "...if its too dark or light I can just use the Gimp or PaintShop Pro to adjust the brightness?"

The problem is that you will lose detail if your initial photo is too dark or too light. Adjusting the brightness will not recover that lost detail.


Here is my Goldilocks example; the first picture is too light, the second too dark and the third is just right.

Using an image editor to decrease brightness in the first photo, the result shows that we have lost detail in the lightest areas of the picture, when compared with the "just right" photo. 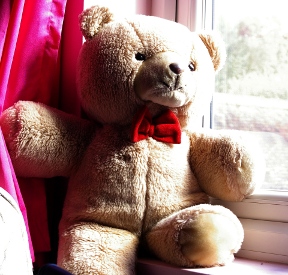 Increasing the brightness on the second (too dark) photo shows some loss of detail in the shadows. 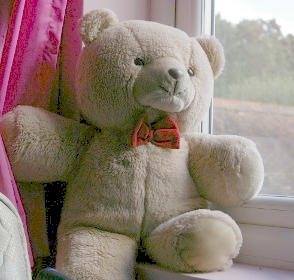 ...and here is the correctly exposed picture (which has not been edited):- 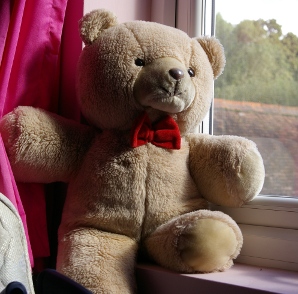 You probably already know about pixels. If a camera is "10Mega-pixels" it basically means that your photos are made up of approximately 10 million little dots. Now if we measure the brightness of each of these little dots in our bear pictures and plot them on 3 histograms, they look something like this. 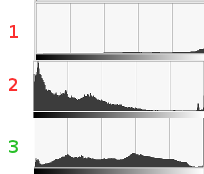 Histogram #1 is for the "too bright" photo, 2="too dark" & 3="just right".
The base-line (x axis) represents pixel intensity, so the darkest are to the left and the lightest to the right. The amplitude (y axis) shows the number of pixels at each intensity level.

So given that we are normally aiming to create a picture with the maximum amount of detail (i.e properly exposed), which one of those shiny buttons do you poke on your new expensive SLR to achieve this?


Well if you are using manual mode on your camera (which means you are in total control) there are 3 settings which affect exposure: ISO, Aperture, and Shutter Speed. Adjusting any one of these will change the level of exposure.

ISO
As an analogy, just think of the volume control on a radio or TV. If the sound is too quiet, you can turn up the volume. If its too loud, you can turn it down a bit.
If the sound is very quiet (maybe you are watching a home video of last weekends B-B-Q) you may have to turn the volume up quite a long way, and you may notice that this results in noise (a crackling sound, or what some call "static"). So think of the ISO setting as your "volume control for light". You can turn it down to stop your pictures being too bright, or up to stop them being too dark. But remember, turning the ISO setting up will increase noise. Noise on your photo means lots of little fine spots or flecks. So your ISO setting is best set low (say, 800 or lower) unless you are taking pictures in low light conditions, such as a night time shot, where you don't want to use your camera flash.
Your camera ISO scale probably consist of numbers that double for each step (e.g. 200, 400, 800, 1600 and so on).

Aperture
An SLR camera lens contains lots of bits of glass and a strange adjustable hole called an aperture. When you adjust your camera aperture, you are adjusting the size of this hole; the bigger you make it, the more light you let in.
Unfortunately, camera aperture settings follow an odd sequence and may look like this: f4.5, f5.6, f6.7, f8.0,....This is because they represent the ratio of lens focal length over aperture size. Consequently, its the smaller numbers that indicate the larger hole size (e.g. f8.0 is much larger than f22).


Shutter speed
When you press the button on your camera to take a picture, you operate the shutter. Just imagine a "flasher" wearing a grubby rain coat, which he opens and then quickly closes. The longer the coat is open, the greater the exposure.

Once again the shutter speeds are a bit odd. A speed of 1000 is an abbreviation of 1/1000 of a second. While a speed of 60 means 1/60 of a second. So you can see that the bigger the number, the shorter the duration that the shutter is open, and the less light is gathered by the camera sensor.


When you use your SLR in manual mode, you probably see some kind of exposure or "Light Meter" display, which may look something like this:-

In the illustration above, the meter shows approximately "+2" which means if you take a picture at this level, the image will be over-exposed (i.e. too much light will enter the camera). You need to adjust ONE of the three controls so that the meter point moves close to the "0" position.

Here is another example where the meter reading is approximately -1.5, the ISO is currently 100, the aperture is f16 and the speed is 125

The numbers on your camera exposure or light meter display should indicate the number of "f-stops". Changing your settings by one stop either doubles or halves the amount of light. Therefore changing the ISO from 200 to 400 should increase exposure by 1 f-stop.

What are the primary functions of aperture, shutter speed and ISO?
I don't want to leave you with the idea that you just randomly change these three settings until you reach the required exposure.


But if you want both your subject and the background in focus, then the aperture may need to be set to (say) f16 or higher.

Shutter Speed: the primary characteristic of shutter speed is control of movement. If you want to capture a drip falling from a tap, you would use a relatively high shutter speed (maybe 1/1000 of a second). But if you wanted to make a waterfall look like a lava flow, you would probably use a very slow shutter (maybe 5 seconds, but please mount your camera on a tripod!).

You should also be aware that it is impossible to hold a camera without introducing "camera shake", so setting higher speeds will minimise any blur in the final photo. A simple rule-of-thumb is that you should set the shutter speed to a faster setting than the focal length of the lens you are using.
For example, if you have a 55mm lens, use speeds of 1/60s or faster. If you are using a 55mm - 300mm telephoto lens set to about 200mm, use speeds greater than 1/200s.


ISO: the primary function of ISO is exposure. If your aperture & shutter speed setting are important to you for a given shot, then you may need to increase your 'light volume' (the ISO setting) in order achieve correct exposure.
However, for most daytime, out-door photos you may be able to leave ISO set to one of the lower settings and control exposure with acceptable speed and aperture settings. Remember that the by-product of increasing the ISO is picture noise.

Although I've used these terms in this post, from this point on, don't think of your photos in simple terms of "too dark" or "too bright".

Consider the exposure first of all, maybe by viewing the histogram on your camera (if it has this option) or via an image editor like Gimp (which is free) or maybe PhotoShop (which costs £'s).

If the exposure is not right, take the picture again. Experiment. Maybe point your camera at the shadows in your scene, then towards the bright regions, and set your camera for a mid-way exposure.

Using the manual mode on your SLR will help you understand not only the effect of camera controls on exposure, but also how sources of light (e.g. the sun, street lamps & indoor lighting) influence your results. I'm sure this will improve your understanding and enjoyment of photography, even when using auto or semi-auto modes in the future.