What we have learnt about hedgehogs

We have been capturing pictures & video of hedgehogs in our garden for the last 18 months.


Its been very interesting.


So what have we discovered?

We had this impression about our local hedgehogs (just like we had with the bats) that numbers had dropped dramatically in recent years. In both cases, this impression was based upon lack of sitings. So I built a bat logger which proved that bats were still flying overhead, and we bought a trailcam and discovered that those spiky hogs were still regular visitors. 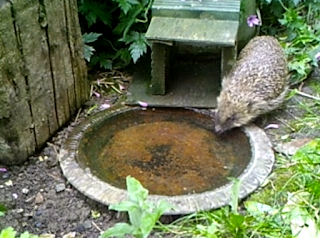 Although there is no way I can compare the present with the past, I can report that we seem to have quite a healthy population of hogs. Deploying a trailcam has also revealed much more interesting information than we expected.

all hedgehogs look the same, right?

But you need to take a good hard look for any differences, something you can only do if you are very observant (...that counts me out) or you can compare photos of each hog.

You also need to accept that hogs roam around. They need water, food, shelter and sex ...probably in that order.

They can travel surprising distances and at speeds up to 6 m.p.h. (although I think more research is needed on this). Males tend to travel further than females, as they need to find unrelated females to mate with (...this is more due to evolution than personal preference) and distances of 1 mile in a night have been observed. But lets take a more conservative nightly range of half a mile.

Take a look at your location on a map, or better yet, using Google Earth satellite view. Now draw a circle with a half mile radius around your house. Just look at the number of gardens and the amount of land that would be in nightly reach of a hedgehog based in your back garden, even assuming it can only travel a half mile.


Now imagine hogs based in gardens or shrub-land around the circumference of that half mile circle. They too could easily reach your garden. So its not just a question of how many hogs a quarter square mile of land can support, as this area overlaps with several similar sized 'territories'.

Even taking the conservative view that hogs can travel only half a mile from basecamp, the question is; how many hogs could be sustained by the food and water available in an area of 1 square mile?

The next question is; do hedgehogs stay in a defined area or territory? I see no reason to suppose that they do. They do not live in family groups or herds. The female raises her hoglets by sheltering, protecting and feeding them for a few weeks, before they all go their separate ways. Male hogs are only interested in mating, and don't stick around long enough to get to know the kids. In fact, their only interest in hoglets is as a potential food source!

So although hedgehogs may be drawn back to locations where the food is plentiful and spend some time using the same over-night accommodation, my guess is that many of them are drifters. If they wander too far to get back to camp before the sun rises, they will just find a new place to crash, and then start their wandering from their new location the next night. But like I've said, this would be an interesting area of research, especially if there was a cheap means of tracking them.

As for our own limited experience, I'd say that we tended to see the same hogs during the winter/early spring months, probably because they stick with their hibernation base until the weather improves. But during the summer we have been able to identify 7 or 8 hogs by reference to hair line & facial markings, paint markings, injury and ticks. We think the paint must have been applied to at least 3 hogs by someone relatively local to us. Two hogs now have white ticks attached to their heads (but in different places). And one hog has a bad rear right foot/leg.

Some hogs we can't identify as they seem to have no distinguishing features. The most we have seen in one night is 5 individuals (end of June/early July) when there were several males chasing the ladies. These males showed no interest in the cat food, they just appeared to be tracking the females.

One other feature is shown in the satellite view above; our area is divided in two by a busy major road. I doubt that any hedgehog would be able to cross 4 lanes of traffic on a regular basis, so I must assume that the majority of hogs we see are restricted to the northerly semi-circle. The trail-camera view only covers a very small patch of our garden, and as we have noted, not all hogs stop at the feeder to eat or drink. So there may be many more visits/visitors that just don't walk past the camera.

So could we estimate that the local population is 10 times the number that we see? ...20 times? ...50 times? I've no idea how you would work this out, but I think we must have a very healthy population for us to observe so many individuals in such a short time-frame.

We plan to buy a second trail cam soon, once we have selected a manufacturer & model (the Secacam Pro looks promising). Running 2 cameras in different areas of our garden may prove that there are more visiting individuals per night than expected.


We also discovered recently that hogs make a variety of sounds, especially the huffing females. I'm considering a system to record sound in much the same way as my bat logger operates. The main problem is traffic noise.

The reason for wanting to record sound is that we currently only record audio when the camera is triggered (obviously). So on a few of our video clips we see a huffing female backing away from a male until they are just out of sight of the camera ...at which point we lose sound!


Hedgehogs are often seen as amiable creatures that just grub around looking for food and curl into a ball at the first sign of trouble. However, we have several video clips showing them in conflict with each other.

While males will obviously get physical with other males in order to get access to a female, we have also seen quite a bit of argy-bargy for no apparent reason.


This is another interesting side to their character that deserves more attention.


We are still seeing typically 3-4 individuals per night and they currently seem to be showing less interest in the cat food. This could be a good sign, as I suspect this may be because they are finding plenty of 'proper food' (e.g. beetles, caterpillars, & so on). And of course I still maintain that hedgehogs don't like slugs!


However, even if they don't eat the food, they usually do stop for a drink. So providing a safe source of drinking water is probably the single most important way to help hedgehogs.

As for the new hog house that we built last year ...no takers! Considering the amount of hog traffic, I'm beginning to think there is something wrong with it or its location.
Posted by SteveDee at 12:29