I wasn't really prepared for this spring.


There was too much going on inside the house for me to be able to keep an eye on the garden.


Fortunately, time waits for no man...
...so by the 1st March, our garden wildlife started to wake up. The arrival of mating frogs resulted in a few healthy dollops of frog's spawn.


Although we haven't had very many newts in our pond in the past, the numbers have been building steadily over the last 5 or 6 years. This year we had more than ever, apparently feasting on the abundant frogs spawn. But this resulted in a problem we have never noticed before. 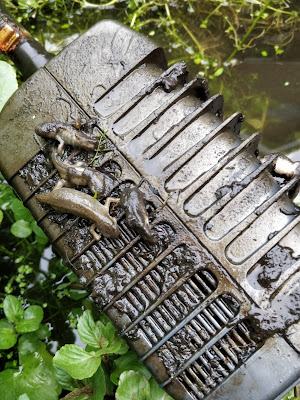 We took the pump out to clear the filter and found 7 or 8 dead newts. They had been sucked in, tail first, and were trapped. They would have drowned within a few minutes.

My wife called the pump manufacturer who admitted that they get a lot of calls at this time of the year, and simply recommend that users switch the pump off during March-April each year.


I've run my bat logger on several (dry) nights during the winter months and have recorded pipistrelle bats a few times, but again, activity really started to ramp up during March.

Here is one example showing a feeding buzz of a common pipistrelle.


Our HedgehogCam captured the occasional shots of a hog feeding during the winter. From the beginning of March we started getting shots every night.

We even captured the hog one night and weighed him. If it was the same one that we weighed back in November, then it had lost 7 ounces during the winter. However, one shot clearly shows 2 hogs.

In some shots, one hog appears to have a dark line across its back. But I don't yet know if this is a reliable way to tell the difference between them (i.e. the dark line may only be visible if the spines are at a certain angle).


I'd notice that a male great tit had been chasing away one or more blue tits from our maple tree bird box. At the beginning of April I connected a battery to my one and only remaining camera/RaspberryPi box. This is the same one that was subject to a takeover in 2018. I had no idea if the system was still working.

A few days ago I wired up the wifi router (which emitted black, acrid smoke and had to be replaced), the time server, and a laptop. Surprise, it still works and we have a resident great tit. 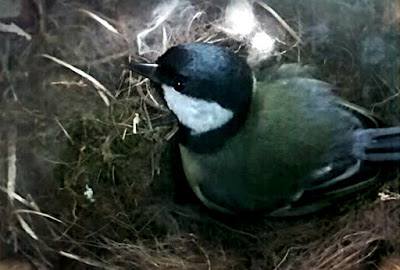 I've only caught a glimpse of a couple of eggs, but I suspect there may be 6-8 by this time. 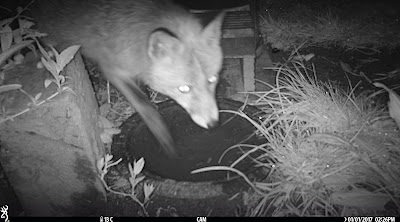