Garden Birds: a pox upon thee

We sometimes see birds in our garden that are clearly 'not right'.


A few have physical disabilities such as broken or missing feet or legs.


While others are clearly just unwell.


Probably the most common condition is lack of head feathers, and this is most frequently observed in blue tits. 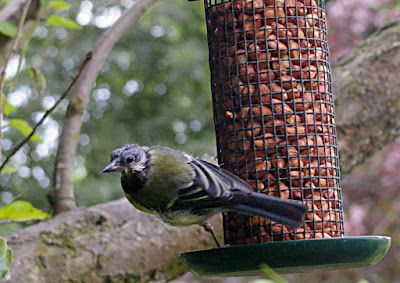 This is caused by a feather mite (Proctophyllodes stylifer) which the bird can remove from its body but struggles to remove from its own head. It doesn't appear to have any lasting effect, and the feathers will grow back.

However we have recently noticed a great tit with a very different problem. 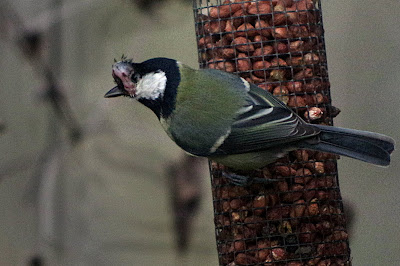 It looks like this guy has a form of Avian Pox, an increasing problem for great tits. The good news is that if it is the "dry" variety, the swelling may go down and the bird could recover, providing he can carry on eating and avoid predation (i.e. his vision may not be good enough on his left-hand side). He probably contracted this from an insect bite.

The bad news is that this could be transmitted to other birds via our feeders or bird baths, although we have not seen others in this condition so far.

The recommendations from groups like RSPB & BTO is to stop it spreading by regular & thorough cleaning of all feeders, or to simply stop feeding altogether.

Both of these suggestions are pretty naive, because we are not the only people within 100yards feeding the birds.


Avian pox tends to be specific to a bird species or family of species. For much of the year (especially this time of the year) we see mixed tit flocks moving around together. So typically a flock of 10-30 birds comprising of blue, coal, great, long-tailed & marsh tits will arrive at the feeders together. After maybe 5-10 minutes they fly over the road to a neighbours feeders, and from there, a few gardens up the road to another feeding station.

The idea behind removing the feeders is to disperse the birds, which is a grand idea if you are the only person with feeders for miles around.

Let's consider the cleaning option; to be effective you would have to thoroughly clean all feeders, water containers and the ground under the feeder after every time a 'visitor' had finished feeding  ...likewise your neighbour's feeding stations and any at nearby parks!

Disease transmission via feeders & bird boxes is one of the negatives of feeding garden birds and providing them with nesting sites. But, do the benefits of feeding and providing shelter outweigh the problems we create for them?

I suppose in an ideal world we would protect their natural habitat and just leave them to get on with it.


There are those that argue we are altering the natural balance, especially in favour of blue tits and great tits which benefit most from feeders and nesting boxes.

In my view the negative effect of spreading disease is more than outweighed by the huge number of birds that benefit (e.g. a few birds die of disease, but the numbers are made up with interest due to the supply of food and shelter).

There are also now 67 birds on the "Red List" of species that need help. Of these, Marsh Tits, Thrush, Sparrows and Starlings are visitors to our feeders, so I like to think we are helping. Other birds which benefit indirectly are predators like the sparrowhawk.
Posted by SteveDee at 11:48