This caused me to question whether my home-brew bat detector was a reliable witness.


Just how much faith can I have that my FD detector is producing sensible recordings?


The folded aluminium box containing the detector electronics is suspended from a uPVC window frame by a bent coat-hanger. Ok, the coat-hanger wire has been carefully bent into shape to act as a cradle, the detector is tightly bound to this cradle using a strap, and the wire has plastic strips to stop crossed sections from rubbing on one another, or the box, and creating high frequency sounds. ...but essentially, its a bit of a hack.

I decided to try to rule out any self-induced mechanical interference by soldering the mic to a short length of co-ax cable. 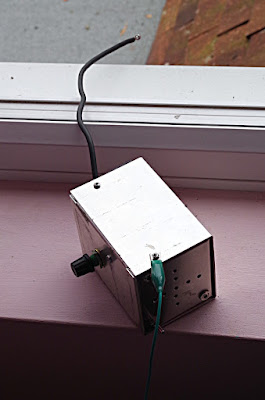 This allows me to have the mic outside the window, with the detector running inside the house.


I just happened to have my mag-lite running when I turned the modified detector on, and immediately noticed the noise (this mag-lite is a round magnifier lens with a ring-light, and must incorporate some kind of inverter). Even with the light off, if the detector is connected to the Raspberry Pi logger, I get random noise & clicks from the detector.

I think the problem is this; the mic co-ax is entering the box and the screen is connected on the circuit board. So there is a noise current flowing into the box which is 'looking for ground'. The system is not grounded because the Pi power supply is not earthed.

A temporary work-around was to connect a croc-lead from the detector box to my soldering iron (with iron plugged into mains, but not switched on). In the longer term I need to find a metal bodied jack socket and mount it to the box.

FmaxE: who's the dominant one?


Take a look at the 4 calls in the spectrogram below; 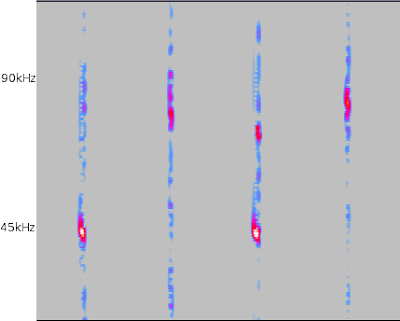 I can't be sure! It looks like 45kHz, but my bat detector is not a scientific instrument. I don't know what the frequency response of my detector looks like because I don't have any data on the Panasonic WM-61A above 20kHz. So if the microphone sensitivity at 80kHz was 20dB lower than at 45kHz, I would select the wrong frequency.

For the 4th call, I'm more convinced that the dominant frequency is high, and the lack of a bright white centre within the red highlight may confirm that the sensitivity is much lower than at 45kHz. 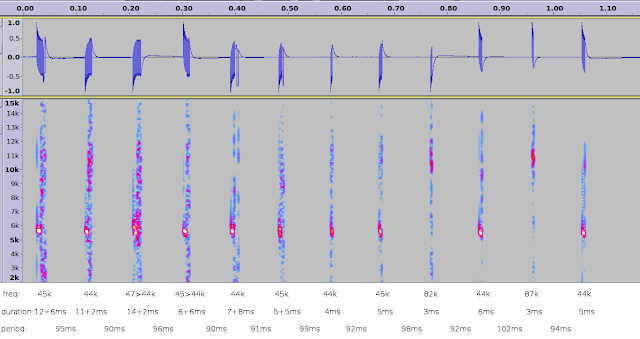 As you an see, I've added the data for dominant frequency, call duration and call period (i.e. leading edge to leading edge). To illustrate the problems I have with identification, consider the following as compared to the data in Jon's book;


I can only assume that the breaks/extensions in the first six calls are a feature of the bat navigating our 'cluttered' back garden. And I guess my simple FD detector lacks the subtlety to render start and end frequencies for each call.

One final comparison was to download a common pipistrelle recording made using a TE (time expansion) system.

I think the only way I'm going to get anything as 'clean' as that will be to ditch the divide-by-8, record directly in real-time and then process in Audacity.

other sources of interference


During the morning I recorded this large bat;

My detector could easily pick up the signal from the Ford's parking sensors at a distance of 15m. There may be others operating in our area with similar calls.
Posted by SteveDee at 12:29