These are OK as long as you don't take a wrong turn or stray off the correct path for some reason.


Although I cannot install topographical maps on my Garmin eTrex 10, I can use Route files.


We often take our eTrex when out walking, but it is usually deployed just as a safety net. Before leaving the car to follow some circular route, I set a way-point. That way, if we are not sure how to find our way back, we just check the eTrex.

This has been surprisingly helpful. However, without any "physical" detail on the eTrex display there may still be a problem. You may know that your destination is due north, but there may be some kind of obstruction directly in the way.

A few weeks ago we almost passed bye the carpark where we had left our car because we couldn't see it, despite being only 20m away. This was due to bracken and thick bushes alongside the footpath we were following. So on this occasion, the eTrex stopped us wandering off too far in the wrong direction. We just had to find another route around the undergrowth.


There are quite a few websites that detail suggested walks, often with a description of what you might see, the level of difficulty and the total walking distance. In addition, many sites now include route files in GPX format that can be downloaded.

Here is an example site: http://www.gps-routes.co.uk/routes/home.nsf/county-walks/Surrey

These files can easily be transfered from my Linux computer to our Garmin eTrex (and there is no reason why you cannot also do this from computers running other operating systems).

The files I have tried so far, display route numbers (e.g. Route 16), which I decided to edit into something more meaningful.

This can be done on a computer (i.e. before copying the files to the eTrex) using a plain text editor like gEdit. Just change the text between the <name> </name> tags near the top of the file. 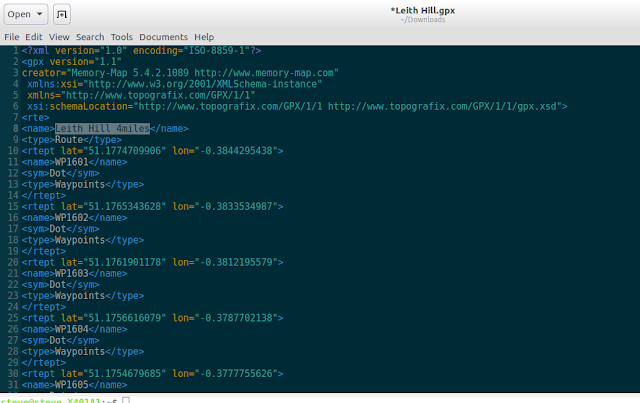 With the eTrex connected to a USB port, the file can be copied from the computer to the Garmin > GPX folder.

So now, with the correct route selected, we have [almost] no excuse for getting lost!
Posted by SteveDee at 12:25