It shouldn't be this difficult to watch 4OD

With Homeland series 4 currently running on Channel 4, we recently missed an episode due to other commitments.


No Problem! Just browse to 4OD and catch up.


Unfortunately it just wasn't that easy.

It's great to be able to watch tv programs over the internet at a time that suits, rather than planning your life around the goggle-box. And with all the internet enabled devices that we have kicking around our house, it should be easy, right?


Well, no. I first tried to use our Smart-arse Sony TV but then remembered it does not do the commercial channels ITV player or 4OD. This tv works really well on BBC iPlayer, but Homeland is not one of their shows.

Next up was my wife's iPad mini. No-go. Apple does not run Adobe Flash.

The next contender was an old HP laptop, on loan from work, which runs Windows 7. After registering with 4OD this started working. Hooray!

But the video couldn't keep up with the audio, and the show kept stopping and starting. The problem was that the graphics processor was just not fast enough.


The final contender was my ASUS laptop running Lubuntu Linux. I knew this was also going to be difficult, and having selected the program from the 4OD website, we were confronted by young Carrie and a rotating "spooling" graphic that just kept spinning and spinning. 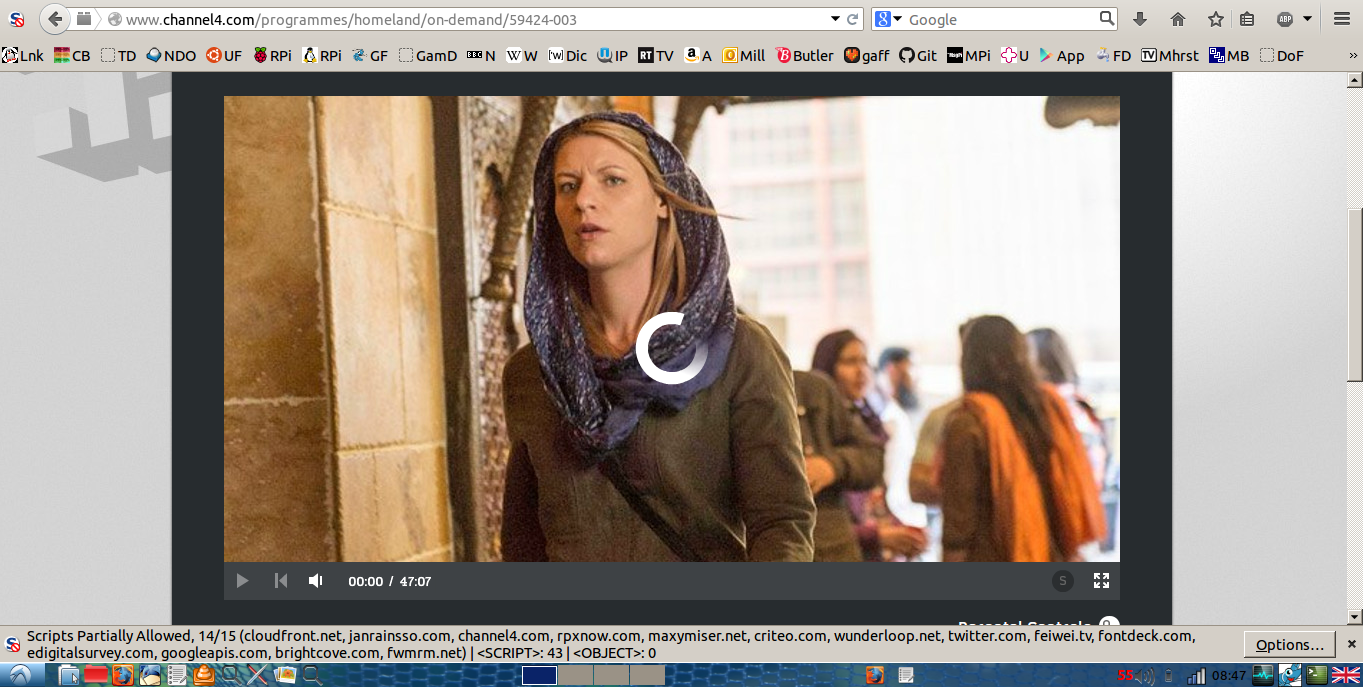 I tinkered with the settings for NoScript and AdBlock Plus on Firefox, but the graphic just kept on spinning, and Carrie's expression seemed to suggest she was as pissed off as we were.

A search on the net revealed a couple of possible solutions which did not work (or maybe did not apply to Lubuntu 14.04). But eventually I did find a solution.

I had already realised that 4OD relies on Adobe Flash (if not the number 1 headache in my working life, certainly in the top 5) but it also needs Adobe DRM.

Adobe DRM depends upon Hal, which is deprecated (no longer included) in Lubuntu 14.04.

Fortunately a guy called Michael Blennerhassett has done something about this. He maintains a PPA which fixes the problem for 'buntu 13.10 and 14.04 (not sure about 14.10). So, in a terminal:-

After restarting Firefox, we were soon driving through the streets of Pakistan with Carrie...


Credit goes to Michael Blennerhassett
Posted by SteveDee at 09:23