The RaspberryPi fitted with a Pi-Mote controller is a neat 433MHz remote control solution for switching mains powered equipment.


But to be of any use, the operation range must be sufficient to satisfy the requirements of your application.


So I set about doing a few range tests and have detailed my method and results here.

Normally, when assessing the performance of a communication system, the transmitter and receiver would be operated in a near ideal environment, free from obstructions that may "soak up" radio waves or create reflections. The results would then require interpretation, with due regard to the characteristics of the prime radio frequency used.

However, what I need is an idea how well this 433MHz system would perform in a home automation environment. Specifically, in my house!


The Pi-Mote board includes an on-board aerial, essentially about 110mm of pcb track that snakes its way across a small area of board. A small hole (just less than a millimetre) is provided for the user to solder a wire antenna.

So my first tests were just using the board as supplied (i.e. no additional aerial).

With the RaspberryPi located in room 1, I ran my test program which automatically controls my remote Energenie switches (i.e. 10sec on, 10sec off).


Operation was pretty much confined to room 1. The signal was obviously not penetrating the brickwork, and with the switch and controller in separate alcoves within this room, the switch did not respond at all. But there was not a problem within this room if the area between transmitter & receiver was not obstructed. Changing the orientation of the boards (to make the snake-aerial vertical) didn't make a lot of difference.

Clearly there was little point in further testing with this configuration, so I straightened out a metal paper clip and used this as a temporary aerial.


This had a big impact on range, and I was able to penetrate 3 substantial brick walls as shown below.


I also did a vertical check and found the system easily reached the top of the house some 25ft up. However, diagonal paths (where the signal has to pass diagonally through brickwork walls) were less successful.


Next, I moved the Pi to the conservatory to do some longer range checks using both the 95mm paper clip, and a 135mm length of single strand wire (taken from a network cable) soldered to the Pi-Mote.


With the paper clip I could cover about 15m (50ft), but not penetrate the wall into room 1.

However, with the properly soldered 135mm wire I could find a few sweet-spots inside room 1 where operation was 100% reliable.


As supplied, the Pi-Mote is probably only suitable for control of Energenie sockets in the same room. But by adding a simple wire antenna, the range is extended giving useful coverage (at least in my case).

With a little care it should be possible to position the Pi-Mote controller to give acceptable coverage in an average family home. This means choosing locations to reduce the number of brick walls that the system has to pass through, and also avoiding large metal objects.

I am pretty sure I will be able to locate the Raspberry Pi system under the stairs on the ground floor and control a socket in the loft above the kitchen. From here I can test the system by controlling an outside light which currently is controlled by an electo-mechanical timer.

This timer is difficult to get to, and often needs to be reset during the winter when we suffer power cuts. So, as I'm not as agile as I use to be, this could be a beneficial application and a good place to start.

I am also pretty sure that my Velleman VM130 receiver controller is more sensitive than the Energenie sockets. Something I may be able to verify once I have a 433MHz transmitter.


This is basically the one described in this earlier post but with the addition of a 10 second timer which continually switches all devices on and off. 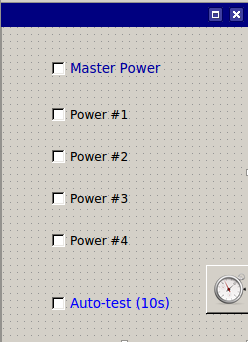