I've been playing with a mixed bag of white LEDs to work out how many I need to illuminate BirdBox 2014.


As this project is battery powered, I want to minimise power consumption where possible to extend battery life.


Like all 5mm LEDs, there is no obvious way to determine what exactly they are (i.e. there are no part numbers). And as this is a mixed bag, I need to sort them by type before including any of them in my circuit.

So armed with a 9Volt battery, a multimeter, breadboard and a selection of resistors, I set about conducting a few simple tests. 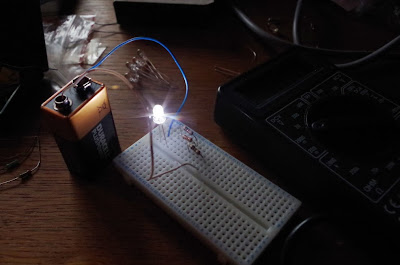 Now call me old fashioned, but I like to run LEDs with a current of 20mA, because in the old days, this was normally considered optimum. Some devices can be driven much harder, but I've never had an LED torch for more than 12months before at least one of the LEDs fails.

At 20mA, any self-respecting LED should last for years, maybe decades.


When correctly polarised (i.e. the LED anode is more positive than the cathode) the LED voltage (known as the forward voltage, Vf) will depend upon the device type and the current flowing through it. So red and infrared LEDs may have a Vf of less than 2V, while other colours are higher, with white LEDs having a Vf typically over 3V.

If you are lucky enough to have the specification for your LED, you may find it quotes the forward voltage for 20mA drive. But with my little test rig, I set about finding the forward voltage by selecting series resistors until the current was approximately 20mA. 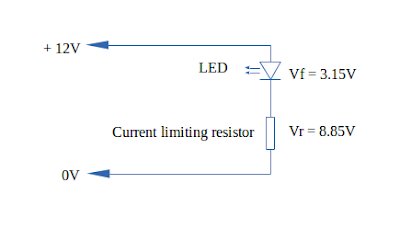 Hmmm, looking again at this simple circuit, it is clear we are wasting power in the series resistor. But we could put several LEDs in series, and still only draw the same current as the single LED in our simple circuit, like this:- 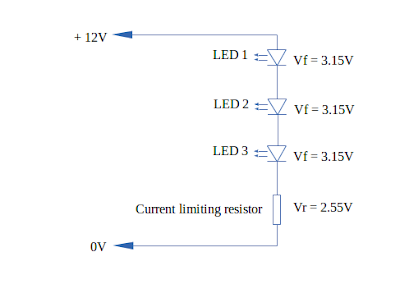 
I suggest you also research LED driver/controllers as there may be suitable devices for your particular application which may reduce battery drain, albeit at the cost of component count.
Posted by SteveDee at 20:07